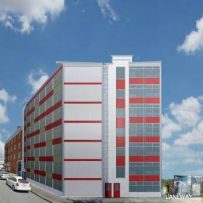 The idea of transforming shipping containers into housing is about to make a giant leap upward.

A local non-profit housing agency that has already built one small project with containers is now aiming to build, at seven storeys, what is believed will be the tallest container building on the continent.

The Atira Women’s Resource Society, which applied for a rezoning for the project last month, is hoping to create 26 social-housing units in the building, which will use about 90 shipping containers stacked seven high on a lot at Hastings and Hawks on the edge of the Downtown Eastside.

“It’s exciting we can develop this new method of construction,” said Janice Abbott, the society’s chief executive, who sees the container-building model she’s been working on as one that will allow many other groups to build more housing at lower cost.

But it’s still a work in progress.

“It’s the next evolution,” said James Weldon, the construction specialist who worked with Atira to build its first container project, Oneesan on Alexander Street, and is now tackling the bigger hurdles for the second one.

The new building, planned for an empty chunk of land behind an existing Atira housing project, the Rice Block, will be a much more difficult test in the practical challenges of building housing with containers.

The city’s building code has been revised since Atira built Oneesan, which opened last year, so this new container structure will have to meet even stricter codes for fire safety, electrical, energy efficiency and more.

But it also takes a lot more planning to figure out how to buy 90 shipping containers – which typically cost anywhere from $3,000 to $5,000 – and how to get them to the site in an orderly way.

“They’re like Lego blocks, but it still needs a lot of co-ordination and a lot of sequencing. They’re 12,000 pounds each because the steel’s such high quality,” Mr. Weldon said. 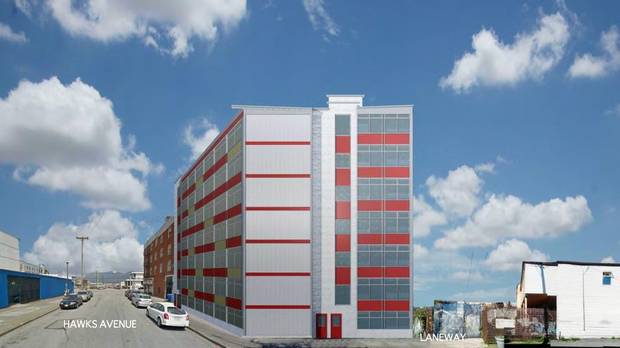 A rendering of the planned shipping-container-based housing complex, situated at the corner of Hastings and Hawks on the edge of Downtown Eastside.

As well, the team, which includes architect Anthony Boni, has to work out how much of the modification to do offsite and how much to do once the containers are stacked at the location.

Shipping containers were developed in 1956 by North Carolina trucking entrepreneur Malcolm McLean, who came up with the idea of using exceptionally strong and uniform-size steel boxes for shipping that could be stacked on freighters and then simply swung onto long-bed trucks once they reached port. That idea is widely credited with revolutionizing and accelerating global trade.

As container shipping has proliferated, the boxes have started to pile up in various parts of the world and people in poor countries had long ago begun to adapt them to use as stores or housing.

But about a decade ago, the idea of using containers as a basic building material became popular with a certain group of designers and innovators in wealthier countries.

Containers have now been used to create housing in the Docklands area of London, for student housing in Amsterdam, for temporary banks in Germany, and for what is described as the world’s tallest container building, at 85 feet, for the Freitag store in Zurich. (The Atira project is projected to be 71 feet tall.)

There are still debates, though, on whether container buildings are just a trendy idea or whether they have real benefits over other construction materials.

Local development consultant Michael Geller says he doubts they are any cheaper than manufactured modular housing.

“By the time you’ve removed all the lining and rebuilt the walls, it’s often more cost-effective to build something new in a factory.”

David Warne, with LGA Architectural Partners in Toronto, says they continue to be appealing because they don’t just potentially reduce costs – they also provide people with a way to upcycle a big chunk of metal that would otherwise become garbage.

“The Chinese are overshipping to us and we’re ending up with a surplus,” says Mr. Warne, whose firm has built single-family housing and shops using containers. To get seriously interested in building with containers, “you have to be into recycling.”

He acknowledges that people get attracted to the idea of container buildings on a more than logical level.

Atira’s Janice Abbott is still convinced there’s a possibility that, once people figure out how to build with containers efficiently, they will be cheaper.

A report done on her Oneesan project showed the final cost of the building came in at $219 a square foot, compared with $241 a square foot for average wood-frame housing.

But that cost was relatively high because the project used two of the 40-by-eight-foot containers for each unit, to make them feel less cramped.

If a housing developer built micro-suites using only one container a unit, the construction cost would drop to $109 a square foot, the report estimated.

In the end, she says, it’s not about being trendy but about trying to find a way to provide desperately needed homes at a lower price than the norm.

“This is about building more housing for women and children.”

Story by: FRANCES BULA, VANCOUVER — The Globe and Mail