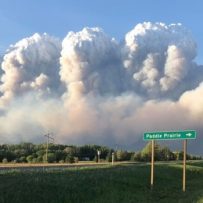 Canada’s oil capital woke up to smoke that made eyes sore and breathing uncomfortable, an earlier-than-usual sign of summer as wildfires burn in the forests north of Calgary.

After 8 months of cold, Calgary residents were unable to fully enjoy blue skies and warm temperatures Friday because of a white haze that blanketed the city with a strong smell of burnt wood. The government’s air quality health index for the city was at “very high risk,” suggesting people reduce or reschedule any strenuous outdoor activities.

While Calgary is no stranger to smoke from Alberta wildfires, the haze more often appears in August, when the season is at its peak. Three years ago, blazes razed entire neighborhoods in the oil-sands town of Fort McMurray and disrupted nearby operations. Wildfires in northern Alberta have so far spared production facilities, but it’s the third year in a row that Calgary, where most of the industry has its high-rise headquarters, is suffering severe smoke issues.

Some pedestrians walked around the city with surgical masks on, while further north in the province thousands of people were evacuated from remote communities where dry conditions have spawned the forest fires.

CTV Edmonton reported that around 14 homes were destroyed and dozens others are in danger in the Metis settlement of Paddle Prairie, about 965 kilometers (600 miles) north of Calgary. The nearest big fires are about 500 kilometers away from Calgary. The town of High Level has been under an evacuation order since May 20. Evacuations have also been ordered for other areas including Keg River and Wabasca.