SMALL BACKYARD HOMES COULD OFFER BOTH HOUSING AND CLIMATE RELIEF 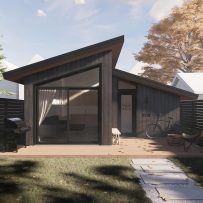 Change is taking root in the Toronto housing scene.

In February, city council voted to allow homeowners to build a garden suite, or secondary residence, in their backyards. It’s part of a housing strategy that aims to address Toronto’s rental crunch.

Proponents say garden suites, along with laneway suites (which were approved in 2018), are a much-needed tool to gently add density to existing residential neighbourhoods — an alternative to highrises or car-dependent sprawl and part of the city’s broader sustainability goals.

Other cities in Ontario (Barrie, Kitchener) and across the country (like Vancouver, Calgary and Edmonton) already allow garden suites. Toronto looked closely at some of those plans to see what worked best to address zoning issues.

Karen Chappele, director of the University of Toronto’s School of Cities, has studied garden suites extensively and says 60,000 were built in California, mostly in Los Angeles, over the last three years alone. She says the concept “takes pressure off of the rest of the housing market.”

Proponents of garden suites say the benefits are many. Homeowners can use the rent to help pay off their mortgage, or as a residence for their adult children, who might not be able to afford to buy in the same area. Some want a residence for elderly parents or a caregiver for themselves.

In terms of sustainability, the small size means less building material and the location allows it to tap into existing amenities in the main house, like electrical or plumbing infrastructure.

François Abbott, an architect and owner of Toronto’s Fabrication Studio, says that in general, garden suites promote a more climate-friendly lifestyle. “There’s less consumerism because you’re in a small space. You’ve got to just pick and choose your objects carefully,” he said.

“They can be as sustainable as you want them to be. Passive house, off grid, you name it — those opportunities are there.”

Race says garden suites alone won’t fix everything, but adds that “Toronto has a huge ‘tall and sprawl’ problem — highrises and single-family homes and not much else.”

Abbott set up Fabrication Studio to focus solely on building garden and laneway suites, after seeing what he calls “the garden movement” taking shape in Toronto. He sees possibilities to design spaces that seamlessly blend into their gardens using green roofs, green walls and other plantings.

“It’s a garden, after all — let’s use that,” he said. “It’s a beautiful way to live. You know, it’s compact architecture, but it’s beautiful and it can be a nice life, even though it’s smaller.”

To clients concerned about cost, he points out it’s still less expensive than buying or building a new home in the city.

“It’s the cheapest possible option to make a new dwelling in the city. And then it adds value right away to your home, and so you have either income or enjoyment from your own use of the garden suite,” he said.

David Driedger, a senior planner with the City of Toronto, says garden suites “can take up 40 per cent of the rear backyard area, up to a maximum footprint of 60 square metres [or 646 square feet].”

There are also height limitations. The unit must be smaller than the main house, and provide access to emergency services, while trees and green space must be protected.

Several neighbourhood associations in Toronto appealed the bylaws, citing concerns about adequate tree protection and whether multiplexes should qualify. Driedger says that once the appeals are resolved, homeowners could potentially start building before the end of the year.

In two years — or after the first 200 garden suites are built — the city will evaluate the bylaws for any issues that might arise.

Race points out that garden suites are a way for homeowners to benefit from new housing construction, rather than just developers.

“I wouldn’t be surprised if Toronto was building 500 laneway and garden suites every year in the not-too-distant future. That’s like two highrises just being invisibly placed into our lowrise neighbourhoods, built entirely by everyday homeowners.”