Skeptics of Trump’s New Nafta Head South of the Border 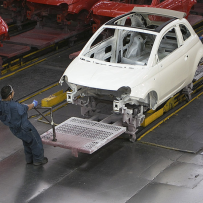 A group of U.S. lawmakers will meet in Mexico City starting Friday with industry experts and officials including President Andres Manuel Lopez Obrador, hoping to resolve their concerns about the U.S.-Mexico-Canada Agreement. House Ways and Means Trade Subcommittee Chairman Earl Blumenauer is leading the delegation. House Democrats want to discuss what they see as deficiencies in the USMCA’s labor and environment chapters.

Lopez Obrador earlier this week said he encourages passage of deal as soon as possible, and Canada is also rooting for progress. “We obviously see the ratification of the USMCA as being critically important,” Canadian Finance Minister Bill Morneau said in a Bloomberg Television interview. “I’m optimistic that we are going to get there.”

There’s been a flurry of activity in Washington in recent days:

At stake is a lot more than the $1.2 trillion in goods the U.S. traded last year with its two closest neighbors. Trump ran in 2016 touting his deal-making prowess and securing a revised Nafta would bolster that impression heading into his reelection bid.