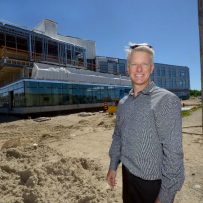 When the shovels went into the ground earlier this year at Sifton Properties’ new West 5 development in west London, many eyes were watching.

“This is an incredibly unique development not only in Ontario but also for Canada and all of North America,” says Andrew Oding, a senior building science associate with Cambridge-based Building Knowledge Canada Inc., founded 30 years ago as a centre for expertise in design and construction of super energy-efficient, high-performance buildings.

What is attracting the attention of other developers, builders, municipalities, utilities and home buyers is the sheer amount of cutting-edge technology going into West 5.

Milfred Hammerbacher, of S2E Technologies, is Sifton’s partner in the project. (S2E stands for Sun to Earth signifying its focus on solar-powered technology.) “Definitely, from my research, this is going to be unique in Canada, a real showcase,” Hammerbacher said.

Oding says seven years of diligent research, consultations and design went into the West 5 plan. “I’m actively helping out the employment numbers in London,” Sifton said, adding that four architectural firms (one local), two local structural firms, a local landscaping company and a local engineering firm had all been involved before the first construction workers arrived.

“The actual work will be going on several fronts simultaneously,” he says. Completion might be a decade down the road, depending on circumstances such as the appearance of new and better materials and building techniques.

“This community will be one of the world’s most advanced, built with ever-newer technologies. This will be a community within which all Canadians will want to live, work and play,” Sifton says.

Integral parts of its livability include a recreation area and a central park that will invite public events, concerts and relaxed strolling.

“Residents will want to enjoy being there,” Sifton says.

He expects the project will attract customers who are already interested in energy-neutral, environmentally safe homes and will be willing to pay “a little bit more” — prices have not been set yet — for such amenities as double walls 30-35 centimetres thick sandwiching a layer of foam insulation, insulation between floors, super-efficient reflective windows and heating/cooling systems and high-efficiency appliances.

“The buildings are a lot tighter,” Sifton says, meaning there’s far less loss of heat to the outdoors or even unwanted heat transfers within the building.

“Heating/cooling used to be 50 per cent of the cost of operating a home. Now it’s 20 per cent, and it all begins with how the building is oriented to the sun.”

Oding said when they researched the reactions of people who had bought such houses, they said they were astounded how little they cost to live in.

The joint project could be the first “net zero” community in Canada that will be totally independent of municipal electricity with all buildings sprouting solar-energy absorbing panels, electrical car recharging plug-ins everywhere and streets designed for driverless cars and robot delivery vehicles.

And, if the experts can sort out technical problems related to harvesting rain water and reusing so-called “grey water,” the same process could be used to cut down on the need to tap into the city water system.

“We already have a water-storage facility built right into our new company headquarters office building. It’s the size of this room,” says Sifton, seated in the spacious boardroom in Sifton’s current head office on Dufferin Avenue in downtown London.

Sifton believes a solution to using the harvested water for purposes such as washing cars “isn’t very far away.”

West 5 is to be built over the next 10 years or so as Canada’s first state-of-the-art SMART community (SMART is an acronym for Specific, Measureable, Attainable, Realistic, Timesensitive). The development north of Oxford Street between Westdel Bourne and Kains Road is expected to eventually house 2,000 residents in apartments, townhomes and condominiums and attract a daytime working population of an estimated 6,000 people to 37,200 square metres (400,000 square feet) of new commercial development.

“Sifton’s West 5 project is the largest in scale in North America. It is at the front edge of the energy-efficiency technology wave,” Oding says.

Indeed, the whole West 5 story is so wrapped up in the rapid evolution of new technological marvels that, since its conception several years ago, the latest products and ideas have been woven into its fabric, and more are expected to be incorporated “on the fly,” Sifton says.

In fact, West 5 is already using materials and construction techniques so new “that they aren’t covered by current building codes. We are writing the new building code ourselves right now, and we expect our new standards and procedures will still be current 25 years down the line,” Sifton adds.

“This is definitely a one-of-a-kind project,” Oding says. “The thing that makes it all work is the tremendous amount of pre-planning that has gone into it. And there has been a whole lot of research and planning at the community level.

The Inside West 5 story

The eye-popping West 5 project was to be called The Village at River Bend but the partners decided that didn’t quite fit. Richard Sifton says coming up with the west part of the West 5 name was easy — the development is about as far west as you can go in London. The rest of the yarn is more intriguing.

“The number 5 is based on numerology sources,” Sifton says. “It symbolizes curiosity, freedom and change, and represents the five senses of humanity.

“The number 5 is the most dynamic and energetic of all the single-digit numbers. The number 5 is a symbol of dynamic motion; It is random energy, elastic and constantly in motion.

“Personally I believe in the last two reasons the most,” Sifton says.