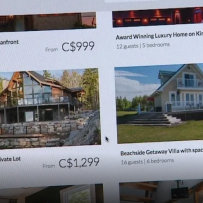 After a $400 rent increase pushed her out of her house, Samantha McPhee has been on the hunt for a new place, but she says prices everywhere have skyrocketed over the past few years.

McPhee says even when she is able to find a place within her budget, it goes fast. She said called the landlord for one place she liked the day after she viewed it but it was already gone.

Over the past three years, Halifax’s vacancy rate has been steadily declining and now sits at 1.6 percent. At the same time, the short-term rental market has been growing.

“On August 31 there were just over 2,400 short-term rentals active in the city,” said McGill University assistant professor David Wachsmuth.

Wachsmuth has been investigating the impact of short-term rentals on local communities worldwide and released a report about the market in Halifax earlier this week.

“The existence of short-term rentals in Halifax have pushed down that vacancy rate and made housing harder to find,” he said. “It means landlords are able to charge a little more so it’s also caused rents to go up.”

The research backs up claims by a local group called Neighbours Speak Up, which has been outspoken against short-term rentals, particularly in the north end.

“In essence, what can happen is you’re losing a neighbour,” said Bill Stewart, spokesperson for the group.

Wachsmuth’s report on short-term rentals (STR) in Halifax finds that STRs can be a positive thing for the economy, allowing homeowners to pocket extra cash by renting out a room or their entire home while they’re away.

The industry also brings in tourists.

But the report also notes that three-quarters of all active STR listings in Halifax are entire-home listings.

“The key for me is making sure we get the balance right where that kind of home-sharing where families can participate on a casual basis,” said Wachsmuth. “And don’t let that get pushed out of the way by commercial operators who are turning entire buildings into, effectively, hotels.”

The municipality is now looking into the impacts of STR in Halifax and collecting feedback from residents through an online survey.

“This is the first time HRM has taken a closer look at short-term rentals,” said HRM planner Jill MacLellan.

“Our current land-use bylaws don’t really consider short-term rentals because this is a kind of recent phenomenon with the popularity of certain platforms like Airbnb.”

McPhee says she understands why short-term rentals are popular but says there needs to be more of a focus on making sure there is housing available to residents, especially affordable housing.