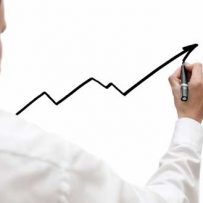 Canada is turning the page on the oil crash.

From trade numbers to jobs to the stock market, evidence is beginning to mount the commodity producing nation is emerging from a lingering slump, after struggling through a cocktail of hurt that included collapsing oil prices, slow global growth and an aging population.

Data released Friday showed the country recorded its best half-year of job gains since 2007. The merchandise trade deficit, which two months ago widened to a record, swung to a surplus in November for the first time in 26 months.

The report adds to signs “the worst is over for the Canadian economy,” Avery Shenfeld, chief economist at Canadian Imperial Bank of Commerce, said by phone from Toronto.

It’s been a tough couple of years.

Oil and gas company investment spending was on pace to drop by 60 percent between 2014 and the end of last year, the Bank of Canada said in its October policy report. The country is struggling to emerge from a 15-year slump in exports — among the worst track records anywhere. Slumping commodity prices and lost export capacity has cut income by C$90 billion ($68 billion) annually, Poloz said in a Nov. 28 speech, or about 4.5 percent of gross domestic product.

While the final numbers aren’t out yet, the economy may end up with less than 2 percent nominal GDP growth for a second straight year. That hasn’t happened since World War II.

The economy contracted as recently as October. That month, Bank of Canada Governor Stephen Poloz said he considered cutting his 0.5 benchmark interest rate, on disappointing exports and global demand. Friday’s reports flip that story, and could lead Poloz to raise his growth forecast at the bank’s Jan. 18 meeting, as oil companies including Cenovus Energy Inc. start to invest again.

“The big downdraft in the economy had been the collapse in capital expenditures in the oil sector,” Shenfeld said. “Even if it turns to trivial growth that’s the largest swing factor in the economy.”

Friday’s report showed full-time positions rose 81,300 in December from the previous month, the biggest gain since March 2012, and even after taking away 27,600 part-time jobs the total employment gain of 53,700 shattered the median economist forecast, which called for a small decline.

Growth may move toward 2 percent for the full year after a 1.3 percent gain in 2016, says Craig Alexander, chief economist at the Conference Board of Canada in Ottawa. That could come even with global risks including U.S. protectionism and slow growth in China.

“These strong reports in late 2016 set the stage for the Canadian economy to deliver a better performance in 2017,” he said. “As we proceed through 2017, we’re going to find that the tide shifts: that jobs are created in the natural resources sector because the industry is adjusting to the new reality.”