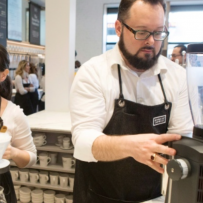 The future of Second Cup Ltd. is in cannabis as the company aims to spur growth amid an ultra-competitive Canadian coffee market, according to one of its directors.

Michael Serruya, managing director of Serruya Private Capital and a major Second Cup shareholder who also sits on its board, said the company is “ready to hit the gas pedal” to sell legal pot as it looks to eventually shift its operations from a national coffee chain to an Amsterdam-like cannabis dispensary where patrons can enjoy their marijuana alongside a latte.

“We believe that you’ll be allowed to sell other paraphernalia in these stores other than cannabis. These stores can’t even sell a can of Coke right now.”

Serruya’s comments come after Second Cup recently announced it began a strategic review which Serruya said will include a “full spectrum” of options that includes shutting underperforming stores.

“It’s going to encompass everything that we believe can improve shareholder value,” he said.

Second Cup experienced rapid growth after it was founded in 1975 in Toronto, eventually going public in 1993. In 2002, it was sold to Cara Operations Ltd. but reentered public markets in 2004 as a royalty income fund. Since then, however, it has faced stiff competition from Starbucks Corp., McDonald’s Corp. and Tim Hortons and also struggled to gain traction with a new store format that tilted its brand upscale.

Second Cup’s market share among Canadian specialist coffee shops dropped to 13.2 per cent last year from 19.9 per cent in 2012, according to Euromonitor. Meanwhile, Starbucks saw its share of the market expand to 75.6 per cent in 2017, up from 62.8 per cent five years prior, the data showed.

Now, Second Cup wants to try its hand at cannabis, one of the fastest growing and most headline-grabbing sectors in years. It has partnered with National Access Cannabis Inc. to re-build some of its underperforming stores under the Meta Cannabis Supply Co. brand — and immediately captured some of the pot sector’s halo effect in the process. Indeed, Second Cup shares surged almost 33 per cent on the day the alliance was announced.

“Our objective at Second Cup is to take some of the best real estate in the country and better utilize the square footage as dispensaries,” Serruya said.

“We’re all ready to hit the gas pedal but until we know what the regulations are, there’s not much we can do right now.”

Mark Goliger, chief executive officer of National Access Cannabis, said it took six weeks to strike a deal with Second Cup after the two companies first met in March. Since then, the partners have taken a surgical approach to determine whether any of Second Cup’s 270-odd coffee shops are worth converting to the pot business.

They have two concept stores set to open in Alberta and at least 20 stores in Ontario that can be retrofitted to pot shops once the Ontario government releases the rules on license applications sometime in the next month, Goliger said. Pot sales in Ontario can only be made online until April when private-sector retailers will be allowed to open up their own cannabis stores.

The company has evaluated the distance each Second Cup location is to a school or park and it has also modeled how much revenue would be necessary to sustain the conversion, with an assumption that shops in urban environments which are heavily trafficked destinations for marijuana would make strong cases to be dispensaries, Goliger said.

Aphria CEO Vic Neufeld discusses the company’s acquisition of CC Pharma, a German medical cannabis company. He also talks about why the U.S. midterm results are positive for the cannabis sector and his outlook on the growth of the recreational market.

Conservatively, they estimate at least 20 stores in Ontario are ripe for conversion although it could be much higher depending on what rules the provincial government announces.

“We’ve looked at all the different locations to figure out if they should be a coffee shop or an Amsterdam-type consumption lounge,” Goliger told BNN Bloomberg in an interview. “[Second Cup] has a fantastic portfolio of real estate.”

A spokesperson for the Ontario finance ministry didn’t respond to BNN Bloomberg’s query about the province’s stance on eventually allowing cannabis smoking lounges.

Serruya’s cannabis connection isn’t just tied to Second Cup. Over the past five years, he has become a significant player in the sector with investments “in the double-digits,” including a $1-million seed investment in Aphria Inc. “when the company was just a concept, an idea,” he said.

In recognition of his financial support of the Leamington, Ont.-based pot producer, he was elected to Aphria’s board earlier this week.

“We made the right decision in backing the right horse,” Serruya said about Aphria. “They’ve been incredibly well positioned for Canada at this point and now it’s really about focusing on becoming a global player.”