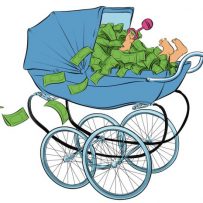 It may not be official, but Canada’s most expensive cities for housing seem to have a “one-bedroom policy” and millennials are no longer buying in.

A new survey from ratesupermarket.ca finds 72.1 per cent of millennials believe their ability to start or expand their family is directly impacted by real estate prices in their region. In Toronto, young families are now facing a detached home that sells for an average price of $1 million, while in Vancouver it’s almost $1.6 million.

The option being rejected by millennials, and other segments of the population, is to start household formation in condominiums — 60 per cent of which are one-bedroom in Toronto’s new home market. Only about five per cent of new condos would fit into the three-bedroom category, which might better suit family living, says condo research firm Urbanation Inc.

“People are not letting go of a value system (that demands detached homes),” said George Carras, president of RealNet Canada, which reported in June that the average price of  a new low-rise home in the Greater Toronto Area had reached $775,419, compared with an average of $448,760 for a unit in a high-rise condo. The gap between the two housing stocks has never been this wide.

“Ground-oriented housing is not going to do anything but go up in price, at least in the GTA. So what changes? The consumer either adapts to high density, moves further out (of the core) or delays family formation.”

Carras says investors have driven condominium development and they seek one-bedroom units because they are easier to rent currently. But “you won’t be able to house the next one-plus million people on one-plus-den condos,” he says, adding there will be more diversity in unit types in the future.

The ratesupermarket.ca survey of 1,700 Canadians found 52.8 per cent of Canadians overall cannot afford to start or expand their families, with 46.4 per cent of millennials sayings their existing debt was making it impossible, even before considering a mortgage.

Benjamin Tal, deputy chief economist with Canadian Imperial Bank of Commerce, thinks there’s no question household formation is being impacted by prices. “Common sense tells you it makes sense. We have an affordability crisis in large parts of the country. In these types of cases, people either stay in the basement (of their parents) but they definitely don’t buy a house. We know in the United States for sure this happened.”

Infrastructure in cities has not kept pace with density, as evidenced by some Toronto condominium developments posting signs warnings parents that their children might not be able to get into local schools because of overcrowding.

“I think we haven’t gone through a transition. I think we need to break some sort of stigma,” said Tal, adding that young families will have to face the reality that living in the cities means leaving in a high-rise. “At least in Vancouver and Toronto, there is a notion that if you don’t buy the house with the nice backyard something is wrong with you.”

Penelope Graham, editor of ratesupermarket.ca, herself someone in her early thirties and engaged, says the prospect of finding a place to live and start a family has proven “daunting” and is making people think twice.

“We bought our condo with two bedrooms, but even then it would be tight (with children),” Graham says. “I grew up in the suburbs with a home that had a backyard. I’ve come to the realization that isn’t going to be feasible for me unless we ‘drive until we qualify’ (further away from the city).”

“I think you do start to see people have kids in these smaller units, but they quickly leave or move out,” he said. “They are either going to look for two-bedroom units or a semi-detached home. The problem is there is a strict supply of these type of units. There really isn’t a lot of inventory of two-bedroom units.”