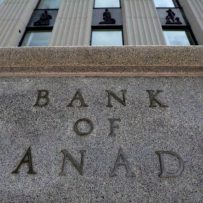 The country’s financial system has become increasingly exposed to economic shocks amid the continued rise of household debt and still-scorching housing prices in major markets, the Bank of Canada said Thursday.

But even as the central bank warned the country’s most significant weak spots have widened, governor Stephen Poloz offered words aimed at reassuring Canadians.

He said the financial system remains sturdy in the context of brightening economic conditions.

“At this stage, I’m just comforted by the fact that the economy is showing better dynamics and that does go into this equation of financial risk as a positive,” Poloz told reporters.

The bank’s assessment was rolled into its bi-annual review, which explored and identified the key vulnerabilities and risks surrounding the stability of the financial system.

Poloz often uses a tree as a metaphor for the economy with vulnerabilities represented by cracks in the tree and risks akin to gusts of wind that could knock it down.

The two most-concerning fissures highlighted by the bank Thursday are also intertwined.

The report said the growth in mortgage lending in Toronto and Vancouver has largely fuelled an increase in Canada’s overall household indebtedness since the bank’s last review six months ago.

“Highly indebted households have less flexibility to deal with sudden changes in their income,” the bank’s report said.

“As the number of these households grows, it is more likely that adverse economic shocks to households would significantly affect the economy and the financial system.”

The bank has been issuing warnings about the steady climb of household debt in Canada for years.

Poloz, however, said Thursday that the numbers are mostly creeping up as some people with little or no debt enter the housing market for the first time.

“Debt is rising because people want to own a home — it’s not really that complicated,” Poloz said.

“Those are signs of a solid economy, a good economy and Mother Nature does this.”

The bank’s report was released with recent indicators showing that Canada’s economy has been building momentum for months.

It also comes, however, as concerns about the Canadian real estate market — domestically and from abroad — continue to pile up.

This week, the Paris-based OECD became the latest international organization to urge Canada to do more to address risks associated with its high-priced housing markets.

Over the past year, various governments in Canada have introduced housing policy changes that the bank predicted will help ease the regional vulnerabilities over time.

Poloz said “it’s simply too early to say” whether governments should consider doing more at this point to address the hotter housing markets.

The measures have included foreign buyer taxes in the Vancouver and the Greater Toronto Area as well as federal restrictions that tightened mortgage qualification rules.

However, while recent federal measures have improved the credit quality of insured mortgages, the bank said the share of uninsured mortgages has increased and their characteristics are showing more signs of risk.

The report warned that another financial stability concern could emerge if more and more borrowers accumulate debt elsewhere to enable them to put down bigger down payments because of recent changes to mortgage rules.

Carolyn Wilkins, the bank’s senior deputy governor, said some people may be drawing more cash through secondary loans like lines of credit that could make a “significant” change to the borrower’s profile.

The bank also outlined two key risks to the financial system, although Poloz categorized them as “extreme” events.

“They are things we need to be mindful of, but no one’s predicting that they’re about to occur,” he said.

The first is the possibility of a large, persistent shock in foreign demand that would lead to a severe recession. While the bank noted the probability of such a risk is low, it said that rising household vulnerabilities mean the severity of such an event, should it occur, has expanded.

The other risk identified in the review, which has a “moderate” chance of occurring, is a regional correction in housing prices in sizzling markets like Toronto, Vancouver and their surrounding areas. Such a development would hurt the broader economy and the financial system, the bank said.

The report also discussed the situation involving mortgage lender Home Capital Group, which faced a funding crisis following allegations from Ontario’s securities watchdog. The bank said “the first steps” of a market-based solution have already played out and that the situation is considered to be isolated to Home Capital.