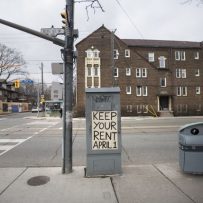 Residential landlords are facing mounting pressure to ease or defer rental charges as the COVID-19 pandemic results in widespread layoffs and loss of income, leading some tenants to consider withholding payments as part of a “rent strike” due to start next month.

The City of Toronto on Tuesday urged private-sector landlords to find solutions with tenants whose finances have been affected by the novel coronavirus, after a Monday conference call that Mayor John Tory held with large landlords and industry associations.

“A number of companies have detailed policies in place to assist tenants whose income has been diminished by the health crisis, but far too many have not communicated anything to reassure anxious tenants who in the ordinary course have rent payments due on April 1,” the city said Tuesday in a statement.

“While the city has no power to direct landlords, the mayor strongly urges all property owners to find ways to help tenants who need it to stay in their homes during these unprecedented times.”

Canada’s labour market is experiencing historic layoffs as COVID-19 forces the shutdown of major industries. Nearly one million Canadians have applied for unemployment benefits over the past week, which suggests many tenant households will be making do with less income.

But some government aid won’t start flowing until after April rent deadlines, raising the prospect of tenants struggling to meet their financial obligations and leading to calls for enhanced rental assistance.

“We need to ensure low-income workers who lose a job or hours of work get income supports or help with rent so they are not out and about doing other paid work to cover the bills,” labour economist Armine Yalnizyan said by e-mail. “We need people to stay home right now.”

Several landlords told The Globe and Mail on Tuesday they would work with tenants on a case-by-case basis to find remedies that would keep them housed during the pandemic.

Park Property Management, which has roughly 8,750 units spread across 72 buildings in Ontario, said solutions could include rent deferrals and repayment plans. “If it takes 12 months [to pay back], it takes 12 months,” said senior vice-president Margaret Herd.

The Minto Group, which has units across the country, also said deferrals were a possibility. However, “we will ask that those that can, should continue to pay their rent,” chief executive officer Michael Waters said in an e-mail.

A spokesperson for Timbercreek Communities – which owns apartments throughout Ontario and Quebec, as well as residences in Calgary, Edmonton, Regina, Winnipeg, Saskatoon and Halifax – said the company would work with tenants “who demonstrate financial hardship with their rent payment.” It will also temporarily suspend rent increases, starting in April.

Several provinces, including Ontario and Quebec, have temporarily stopped evictions. Nova Scotia and British Columbia have said no one affected by COVID-19 will be evicted, with B.C. set to announce details Wednesday.

Landlords will soon get an indication of how many tenants forgo payments. Parkdale Organize, a grassroots advocacy group, has put up posters throughout Toronto asking tenants to pocket their rental payments in April.

“We will keep our rent together – building by building, block by block, neighbourhood by neighbourhood,” the group’s website reads. “There is strength in numbers. Thousands of us deciding to keep our rent gives us the resources to better provide for the health and well-being of our families and communities.”

Facebook posts suggest many Toronto-area tenants are in support of a rent strike, while others are trying to spark a similar movement in other cities.

The prospect of non-payment has led to considerable anxiety for some landlords.

Kayla Andrade and her husband own several rental units in Cambridge, Ont. One of her tenants works in retail and is temporarily out of work. Ms. Andrade has told her tenant to “pay whatever you can based on what comes in,” but that she can only “do that with so many of our tenants.”

Ms. Andrade said she expects to eventually be paid the full rent from all her tenants and if they refuse to pay, she will file an eviction order.

Although lenders have said they would consider mortgage deferrals of up to six months for financially strapped homeowners and small businesses, Ms. Andrade said apartment owners would still eventually have to pay the mortgage in addition to many other bills such as insurance and maintenance.

Labour distress is likely to get worse. Research company Capital Economics on Tuesday projected the unemployment rate could climb to nearly 15 per cent in the coming months. (It’s currently 5.6 per cent.)

A recent report from the Canadian Centre for Policy Alternatives said nearly half of the country’s working tenant households would run out of savings in less than one month without employment income.