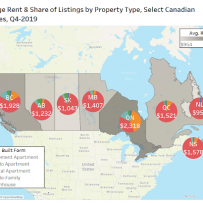 The average monthly asking rent for Canada rose 4.3 per cent year over year at the end of December, according to the January National Rent Report from Rentals.ca and Bullpen Research & Consulting.

The nation’s three largest cities experienced significant rent increases in 2019 for all property types listed on Rentals.ca: Toronto at 9 per cent; Montreal at 25 per cent and Vancouver at 11 per cent.

In Montreal, even though the sample size is robust, expensive downtown listings in 2019 outnumbered those in 2018, which likely played a factor in skewing the December 2019 rent level upward. Average monthly rents went from $1,286 to $1,611 year over year.

In Vancouver, higher-rent condominium apartment listings on Rentals.ca in 2019 exceeded those in 2018 which pulled up the average rents. But Vancouver rent growth was impressive given the slump in the for-sale housing market in the early part of 2019.

And what about Toronto? It’s just expensive to find a place to live there.

Young tenants in all three municipalities are looking for walkable downtown communities where they can live without the expense of owning and parking a car  — and without a crippling commute. To deal with affordability, young professionals are squeezing into smaller units and living with roommates well into their 30s.

Rental affordability is expected to get worse in 2020 in Ontario and British Columbia, despite an increase in new rental apartment construction, and the crackdown on empty units and AirBnB in several markets.

Rentals.ca is forecasting more modest rental growth in 2020 versus 2019, but the expectation is average rents will grow faster than inflation in most major markets outside of Alberta and Saskatchewan.

With Bullpen Research & Consulting, Rentals.ca also forecasts annual rental rates could increase in 2020 by as much as 7 per cent in Toronto, 5 per cent in Montreal, 4 per cent in Ottawa and 3 per cent in Vancouver.

In the January report, Toronto had the priciest average monthly rent of the 30 cities on the list for a one-bedroom home at $2,299 and for a two-bedroom at $2,914.

The average rent for Canadian properties listed on Rentals.ca in December 2019 was $1,854 per month, a decrease of 3.3% monthly (even with an annual increase of 4.3 per cent).

Rentals.ca partner Local Logic provided insights for renters lifestyle interests and found many millennial families want more than anything to live near a quality school.

“As more families continue to rent as opposed to buy, we see renters for larger homes are willing to sacrifice their ability to take transit or walk to get their groceries in favour of being near a quality school,” says Vincent-Charles Hodder, CEO of Local Logic. “We expect the rental markets to perform strong in areas close to schools in 2020.” Below is a Toronto specific chart showing renters interest. The sample includes about 5.5 million listing views coming from around four million users.

Other takeaways from the January National Rent Report include: 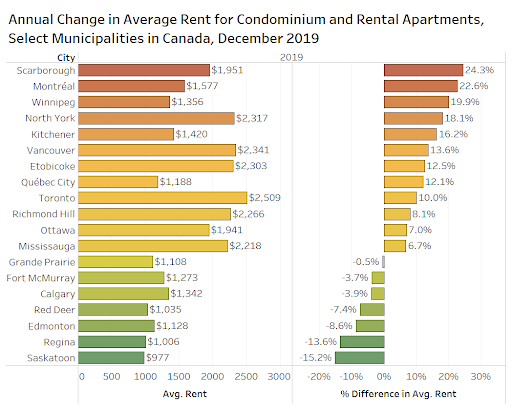 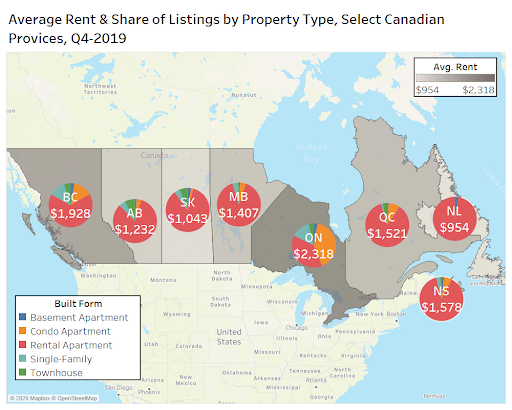 “Many Canadians both young and old are choosing to rent for lifestyle reasons,” says Ben Myers, president of Bullpen Research & Consulting. “Evan Siddall, president and chief executive of Canada Mortgage and Housing Corporation, recently said that the glorification of homeownership is counterproductive economically and socially.

“Developers across the country are recognizing this shift in mentality away from home ownership, as the number of rental apartment starts topped 54,000 in Canada in 2019, marking the 10th consecutive year of rising new construction activity.”

“A logjam of tenants is clogging the bottom of the market,” says Matt Danison, CEO of Rentals.ca  “They are seeking the least expensive properties, often far from transit and their jobs.

“For example, growth in rental rates in Scarborough, North York and Etobicoke topped growth in the former City of Toronto as tenants search for cheaper apartments outside the downtown core.

“And, he adds, “We will continue to see more renters extending beyond the GTA to commuter cities such as Hamilton.”