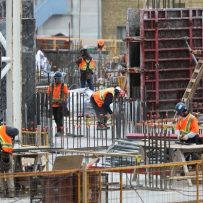 Toronto could be a more comfortable place for tenants by the end of the year, even if the COVID-19 precautions slow down work at some construction sites, says the president of Urbanation, a market research firm which tracks development.

Shaun Hildebrand said condo rents could decline by as much as five per cent this year, retreating to 2018 levels. That’s about $100 less than the current average of about $2,400 a month.

Vacancy rates on the condo side of the market could also climb to three to four per cent, a level that Toronto hasn’t experienced since the economic collapse of 2009, and one considered healthier than the approximately one to two per cent vacancy level that has persisted in recent years.

“We’re still underbuilding rentals but I don’t think it’s going to feel like it this year,” said Hildebrand.

That’s because the Toronto area was expected to add 33,000 units to the rental stock this year — about 29,000 of those are condos. The remaining 4,000 are purpose-built rentals.

That’s a significant increase from last year, when there were 14,468 condo completions and 3,627 purpose-built units. The high for condo completions was 2014 when 21,133 units came on stream — and rents grew by only 0.8 per cent.

Hildebrand expects closing borders due to COVID-19 will be one factor reducing demand for apartments. The number of non-permanent workers and foreign students, who normally add to Toronto’s rental demand, is likely to be curtailed.

Although the Toronto area will continue to attract new households, unemployment will probably put some slack in those numbers too, he said.

Short-term rental regulations are already starting to see some condos converted to the long-term market.

The progress of construction in the COVID-19 environment is an “evolving story,” said Hildebrand, in light of the province declaring construction on a list of essential services that can keep operating amid widespread business and store closures.

“Most of the construction sites are still operating. There could be some supply-chain disruptions with respect to getting all the finishing materials to actually complete the projects, so it may be the case that we don’t reach that level of completions that we were projecting for this year,” he said on Tuesday.

Nevertheless, he still expects “a pretty decent year” based on many of the current projects being close to completion. “We’re talking about that 29,000-unit number but more than half of those were scheduled for the first half of the year,” he said.

CMHC says there are about 315,630 purpose-built rental apartments in Toronto, compared to about 137,794 condos in the rental supply.

Although rents have been showing signs of flattening since last year, Hildebrand said landlords who are renting out this year’s completed units should still be able to cover their carrying costs because they would have paid significantly less than today’s condo prices.

Investors who have bought more recently may find it more challenging to cover those costs when their units are built in future years.

“With families waiting to close on new properties, sales of existing homes, and countless other logistical details associated with buying and selling a property it is essential to keep the industry working,” he said.

Wilkes added that the construction industry increased building-site sanitation and adopted other public-health measures in response to the COVID-19 crisis.