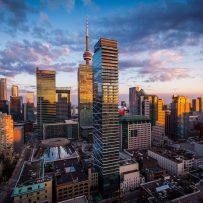 The health crisis, its consequent economic fallout, and new regulations for Airbnbs in Toronto have had a silver lining for tenants who were suffering under the city’s exorbitant rent prices and overall high cost of living, with rents continuing to fall month-over-month and hovering drastically below what they were at the same time last year.

Last month, the average rent for all residential property types in Toronto proper hit $2,150 — an astounding 17.1 per cent drop from Oct. 2019 — according to data from Rentals.ca and Bullpen Research & Consulting’s latest Toronto GTA Rent Report.

Unfortunately for those living just outside of the city, including the many who’ve left it amid pandemic lockdown and the shift to work-from-home, the same can’t be said for surrounding suburbs.

The average rent price in Richmond Hill and Oakville was actually higher than Toronto last month, presumably in part due to the fact that a larger proportion of full family homes are for rent in these locales, while rents in Brampton, Burlington, Vaughan, York, Markham and Mississauga all also surpassed $2,000.

For some of these municipalities, the mean rent in Oct. 2020 was only marginally cheaper year-over-year, with Oshawa and Richmond Hill’s less than one per cent cheaper than a year ago and Brampton and Burlington’s only dropping around 2.5 per cent.

But with Toronto’s huge decrease, it all averaged out to a 13 per cent reduction in rents across the board in the GTA overall, down for the 11th straight month to $2,122 — certainly nothing to complain about after so many months and years of rent rates climbing pre-COVID.

Rents for condo units in particular are plummeting the most significantly in the region, as are prices to actually purchase them, especially small-square-footage “micro-condos” in the downtown core while all other real estate in the city keeps on getting pricier. Rents for condos in the city are now down to about $3.33 per square foot, compared with $3.95 last October.

And, the most in-demand neighbourhoods to rent based on Rentals.ca searches last month are currently the Bay Street Corridor, Davisville, Church and Wellesley, Willowdale East and the Harbourfront — most of which are known to be quite condo dense.

Regardless of the corner of the city, it’s apparent that “average rent in the City of Toronto continues to decline, and will likely finish the year down 20 per cent annually, an unprecedented one year decline,” the president of Bullpen said in a release about the new findings.

He added that he believes “the second wave and lockdown will further erode confidence in the return of the downtown rental market,” but that prices may start to surge again after the arrival of the COVID-19 vaccine.

Story by: Blog TO