Renting the good life: Apartments no longer need be a temporary stop on the way to bigger and better things 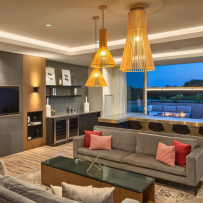 According to a 2017 report from RentCafe, an apartment search website, high-income tenants are the fastest-growing segment of the rental market.

At 101 St. Clair, a midtown property from Camrost Felcorp, there’s a 24/7 concierge as well as a “day porter” for package deliveries. Fitness facilities include a pool — but also squash courts and a golf simulator room. Outside, there’s a dog parkette and a barbeque space complete with a waterfall.

What residents at this upmarket building do not have, however, is a mortgage.

Not all that long ago, renting an apartment was considered a temporary stop on the way to bigger and better. Luxury, especially in real estate, was a commitment. But according to a 2017 report from RentCafe, an apartment search website, high-income tenants are the fastest-growing segment of the rental market.

That’s partly a reflection of downsizing Baby Boomers, who expect grand lifestyles even as they sell off the family pile. It’s also a product of millennials’ need for flexibility (on average, they change jobs every three years). And in an era where you can “rent the runway” and lease a Porsche, why save for a down-payment on luxury living space?

Toronto developers certainly see the opportunity in purpose-built luxury rentals. For those who can afford the rent — which can range from $2,400 a month for 600 square feet to upwards of $10,000 for expansive suites — gone are the days of bleak, cookie-cutter buildings with tiny units and zero amenities. Instead, there are a growing number of units with high-end finishes and perks such as urban gardens, soundproof music studios and lavish common rooms.

Situated between Yorkville and Cabbagetown, The Selby epitomizes the evolution of premium rentals. The 50-storey building from Tricon House was originally slated for condos. Now, in-suite Scavolini kitchens, keyless smart locks and walk-in closets give rentals (between 524 and 1093 square feet) an upscale feel.

At Yonge and Gerrard, The Livmore by GWL Realty Advisors rents out units as small as 355 square feet as well as apartments in the 1,500-square-foot range. All tenants can access the outdoors care of a two-storey sky lounge on the 26th floor and a terrace on the fifth. The building also includes a 3,000-square-foot fitness centre with a yoga studio.

In the downtown core, at King and Bathurst, Minto’s Niagara West is home to a “rooftop playground” that includes a swimming pool, lush greenery, a dog run and fire pits. The fitness centre has a sauna and steam room, and there’s a fully-equipped games room. Units range between 419-square-foot studios and three-bedroom townhouses that clock in at 1,227 square feet. Over 50,000 square feet of retail space includes an in-building grocery store.

Some rental properties are also upping their game by offering exclusive events. This move seems designed to lure millennials, in particular, known for spending on doing rather than acquiring. According to a study by Harris Group, 72 per cent of Gen Y would purchase experiences over material goods such as fancy appliances, cars and, yes, real estate.

Two St. Thomas by BentallGreenOak and KingSett Capital, for example, will offer its Yorkville residents access to fashion shows and chef tastings. Tenants will also get preferred rates on purchases and in-home design consultations from Canadian furniture company EQ3. In addition, the style-conscious property boasts an international and Canadian art collection and a partnership with the ultra-trendy fitness club Equinox. Units range from 534 to 1428 square feet.

At Yonge and Eglinton, The Montgomery by Rhapsody Living offers premium rentals on top of a preserved 1930s building. Floor plans range from 519 to 1088 square feet. Amenities in the boutique building, which has only 233 units, include an outdoor saltwater pool, a yoga studio and massage treatment rooms, a dog running area and a state-of-the-art fitness centre. In a progressive move, the building is also 100 per cent smoke-free. The Montgomery advertises future events, too, aimed at encouraging residents to engage with one another and the community. 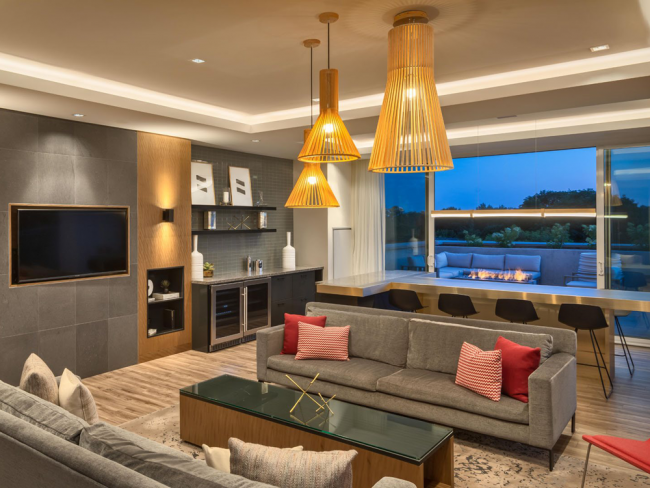 As with condos, Toronto developers are also creating entire rental communities. At the former Honest Ed’s site, Westbank Corp is erecting three rental towers and more than 30 micro buildings for a total of 1,100 rental units over 4.5 acres of land. More than half of these will be two-bedroom spaces and larger, with some four-bedroom units. A daycare is in the works, as are bike and car co-op programs.

There will also be over 200,000 square feet of retail, a glass-roofed Mirvish Village Market and a curbless pedestrian-friendly road inspired by shared-living streets found in the Netherlands, known as “woonerfs.” There’s been talk of hosting Hot Docs movie nights on the street in partnership with the nearby Bloor Cinema and commissioning graffiti artists to paint murals. Live-work spaces, artist studios and a community garden round out the impressive plans.

With so many premium projects on the way, any stigma associated with renting is a relic of the past. Many new rental properties match, if not exceed, what’s available in the buyers’ market. If luxury is defined by choice and personalization, there’s more of it than ever in Toronto’s real estate market.