RENTAL VACANCY RATES IN WINNIPEG UP, BUT AFFORDABLE HOUSING IS HARDER TO COME BY 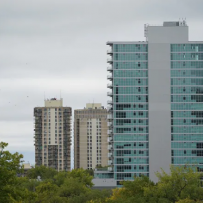 You may have heard it’s a seller’s market when it comes to Winnipeg real estate right now.

But owners of some rental properties are offering incentives just to get potential tenants into their apartment buildings, due to a high rental vacancy rate in the city.

That rate increased to almost four per cent by the end of 2020, compared to just over three per cent in 2019, according to the Canada Mortgage and Housing Corporation’s annual rental market report.

As in many cases over the past year, the pandemic is partly to blame, says Avrom Charach, a Winnipeg property manager and spokesperson for the Professional Property Managers Association.

Winnipeg has seen a lot of new construction in the last decade, equalling about 1,500 new apartments each year. But this year, fewer people were moving within the city or moving to Winnipeg, he said.

“When you construct an extra 1,500 to 2,000 apartment units and there’s … less people moving, you don’t have people moving into those new units,” he said.

Most of the vacancies are among Winnipeg’s more expensive properties, according to the Canada Mortgage and Housing Corporation’s report.

The CMHC defines “affordable” rent as totalling 30 per cent of household income or less.

Individuals in the lowest income quintile — those with incomes of less than $25,000, for whom an “affordable” unit would have monthly rent of $625 or less — see the lowest vacancy rates in Winnipeg, at just 2.9 per cent, the report says.

Charach says he thinks the reason for the gap is because most of the new construction in the city has been focused on building what some would call “luxury apartments,” while there’s been little to no new construction of units affordable to those with lower incomes.

“There really is no new construction aimed at that dollar value, simply because someone building an apartment building for profit can’t even cover their costs at the $625 [per month] rents we’re looking at,” he said.

Charach says he thinks provincial or federal incentives for developers to build affordable housing units could help, such as having better amortization rates for construction costs.

Another idea is enhancing portable housing benefits, where government agencies help tenants cover rent where the cost is not something they could usually afford, Charach said (the benefits are called “portable” because they’re tied to the renter, not a specific unit).

‘More people struggling at the bottom’

Another issue is that the province’s employment and income assistance program has not kept up with average rental costs in the city, said Chantal Smith, who leads a tenant-landlord co-operation program at the North End Renewal Corporation.

The average rent in Winnipeg last year was $1,107, according to the Canada Mortgage and Housing Corporation report.

“There are more people struggling at the bottom and there just are not enough housing units to go around that they can reasonably afford,” she said.

That can leave people facing “untenable circumstances” and “unsafe situations,” like renting with a stranger, she said.

“It’s the most vulnerable people that have to pay the steepest price, either with safety concerns or being taken advantage of.”

As in many Canadian cities, income inequality is widening in Winnipeg, said Jino Distasio, a professor of urban geography at the University of Winnipeg.

“We need to close that gap in Winnipeg, to make sure that we’re not creating these really two diverse worlds, whether you have a lot of money or very little,” he said.

“Otherwise, we’ll see the income inequalities widen and we’ll see the disparities between the inner city and non-inner city neighbourhoods, and also into the capital region, widen as well.”