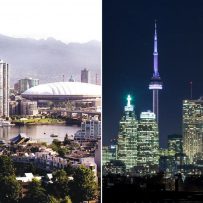 With the COVID-19 pandemic shifting where people live and work, the next few years could be tough ones for landlords in Canada’s largest cities.

But they could be better for some of the country’s long-struggling secondary cities ― and for renters, who might finally find a good deal on housing after years of soaring prices.

Rental rates in Canada’s largest cities are cratering. With millions more Canadians working from home, post-secondary students taking online classes and immigration to Canada slowing to a trickle, demand for rental housing has dried up.

Rates in Toronto and Vancouver have been falling since the early months of the pandemic, and have now clocked some of the largest year-over-year declines in North America.

According to U.S. apartment rental site Zumper, and its Canadian sister brand, Padmapper, Vancouver had the second-steepest drop in North American rental rates over the past year, falling 14.1 per cent to $2,750. Only San Francisco ― by most measures the most expensive city on the continent ― saw faster rental rate declines, down 20 per cent in a year, to US$3,800.

As those cities experience an out-migration of residents, smaller, more affordable cities ― especially those near large ones ― are booming. In those places, rents are rising rapidly even amid the pandemic, both in Canada and the U.S.

While rents are falling in Vancouver, they are soaring in the B.C. cities of Abbotsford and Victoria, up around 15 per cent in both. Near Toronto, Barrie and Oshawa have also seen rents spike in the 15-per-cent range. Rents are soaring in Newark, N.J. near New York, and in Fresno and Bakersfield, Calif., north of Los Angeles County.

This could soon impact Canada’s condo markets. They went through a period of strength this summer, as buyers jumped back in following the lockdowns, but evidence is mounting that condos could soon be in for a hard time.

The condo supply available for rent in Toronto has nearly doubled in the past year, according to an analysis at Better Dwelling, and the inventory has reached an all-time high.

“The increase in listings and sales volumes is expected to persist for the near term. This trend is due to slowing population growth, and an influx of recent condo apartment completions,” Better Dwelling said.

But the trend may not be permanent. For one, it’s not clear how many of the people working from home today will do so forever. While some companies, like Twitter, have said they will allow employees to work from home indefinitely, other businesses, such as major international banks, are calling employees back into work.

Some argue the shift out of the city is an acceleration of trends we were seeing before the pandemic. It was, in fact, the case that Toronto and Vancouver were already seeing net out-migration of residents before the pandemic, largely due to high housing costs. Were it not for immigration, these cities’ populations would be shrinking or stagnant.

“Our theory is that the pandemic has accelerated normal life choices for a key cohort of people,” economist Stephen Brown of Capital Economics told HuffPost Canada earlier this week. “Say, for example, a certain (percentage) of 30-35 year olds move to the suburbs each year to start a family. The pandemic has encouraged a much bigger share to move this year.”

If that’s the case, the exodus to smaller cities could slow down once the pandemic is over, and Canada’s largest cities could return to their old habits of rapidly rising housing costs. In the meantime, the mantle of “boomtown” will be held by the Halifaxes of the world.