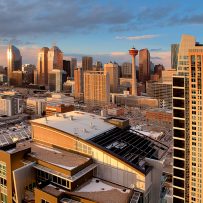 Homeownership is becoming increasingly difficult to attain in Calgary, but the city’s rental market is on fire.

“The way this is connected to the rental market is a function of these affordability challenges we’re seeing in the market, and given the pressures put on an individual’s affordability—and we know interest rates are higher—they are renting longer,” said James Cuddy, a senior analyst with the Canada Mortgage and Housing Corporation.

Another reason for the buoyant rental market is that interprovincial migration was positive through the first three quarters of 2018—a stark contrast to the previous 2.5 years of negative growth—and that has also done its part to push the vacancy rate down.

“We’ve also seen some steady growth in terms of international migration, so it’s contributing to higher demand for rentals in Calgary,” added Cuddy.

The outlook for ownership, according to CMHC, isn’t as rosy. Inventory levels are high in the city and builders have started scaling back production. One reason for languid sales is high unemployment and low disposable income.

“The general economic recovery we’ve seen since the last recession has been relatively slow; unemployment rates remain elevated and a lack of personal growth in disposable income has hurt the ability to move into homeownership and prompted more people to look into more affordable options,” said Cuddy.

John Hripko, a sales agent with Royal LePage Benchmark, says that the B-20 mortgage stress test has ravaged ownership prospects for many would-be purchasers.

“It prevented a lot of people from qualifying for a mortgage because their affordability went down by 15-20%,” said Hripko. “I think the rules are realistic from the standpoint of preventing people from being in over their heads. It’s short-term pain for long-term gain.”

But while B-20 removed many buyers from the market, it may have also contributed to decreased debt levels.

“The Bank of Canada broke it down regionally and the share of these highly indebted borrowers had decreased after implementation,” said Cuddy. “However, the caveat is it’s difficult to truly attribute these trends to the stress test because of other things going on, particularly interest rates, which could be—Canada-wide—contributing to the decline of highly indebted borrowers.”