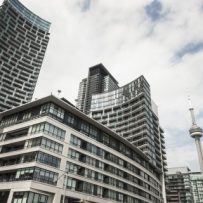 The number of purpose-built rental apartments that began occupancy in the GTA in Q1-2019 reached a more than 25-year high of 1,849 units, which was nearly five times greater than the quarterly average since Q1-2016 and represented significant growth considering only 13,520 units have been built since 2005. Demand for the newly completed rental buildings was strong, with several projects leasing close to half of their units by the end of the quarter.

While vacancy rates surveyed within purpose-built projects (completed since 2005) remained extremely low at an average of 0.6%, rent growth showed moderation in the first quarter. Purpose-built rents for units available for lease during the quarter grew by 5% year-over-year on a same-building basis, slowing from a 9% annual pace at the end of last year in Q4-2018. As of Q1-2019, purpose-built rents in buildings completed since 2005 averaged $2,398, or $3.25 per square foot (psf) based on an average size of 738 sf.

Condominium rent growth remained strong in the first quarter, but also become slightly less heated. On a same-building basis, condominium rents grew by 7.7% psf in Q1-2019, compared to a 9.2% annual increase in Q4-2018. Monthly condominium rents for units leased during the first quarter averaged $2,376 ($3.28 psf) across the GTA, 7.8% higher than a year ago. In the Central Toronto market represented by the former City of Toronto (i.e. excluding North York, Scarborough, and Etobicoke), average condominium rents increased by 4.5% annually in Q1-2019 to $2,542 ($3.71 psf) — the slowest rate of rent growth for the central market area in two years.

Condominium rent growth is heading towards a more moderate pace relative to the past couple years as rental affordability challenges have become greater and more supply is entering the market from projects finishing construction. Although the volume of condominiums leased through MLS grew by 13% year-over-year in Q1-2019 to 6,005 units, supply grew faster than demand last quarter, pushing down the ratio of leases-to-listings to 73% — the lowest level in four years. As of the end of the quarter, there were 2,059 active condominium rental listings on MLS, representing a 44% increase from a year ago, but still equal to less than one month of supply. Furthermore, the average time on market of 20 days in Q1-2019 was at its highest level in three years, indicating that units are taking a bit longer to rent.

“The increase in rental completions in early 2019, which is coinciding with more condominium projects finishing construction, has shown that growth in new supply can have a direct impact on the rate of rent growth.  The challenge going forward will be keeping rental construction numbers rising to a level that meets growth in demand”