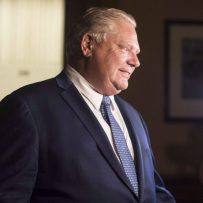 Ontario Premier Doug Ford has hinted that his government might bring in a rent-to-own program for social housing tenants.

In a “fireside chat” with the CD Howe Institute, Ford was asked about housing, a concern for many Canadians.

Toronto Community Housing, for example, has thousands of units sitting empty due to a repairs backlog, and those should be fixed before building new units, Ford said.

“But give them the opportunity to own their own home and they’ll take care of it, and over a 20-year period they can have full ownership of it and I just think it will work out a lot, lot better.”

It was a theme heard in consultations with a broad range of stakeholders, she said.

“The government is currently considering a full-range of options as part of the strategies it has launched to help people find a home that meets their needs and budget,” Yelich said in a statement when asked whether the premier meant public housing tenants would be allowed to purchase units with government backing.

Ford also said that the government was working on addressing the backlog in the approvals process for new housing construction.

“We’re going to unleash the contractors and let them start developing,” he said.