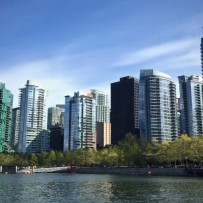 When Peter Dowdy, 35, and his wife were on the hunt for a temporary rental apartment in Vancouver at the beginning of the pandemic, he couldn’t believe his luck.

The couple had sold their apartment and were looking for a six-month lease while they searched for a new home to buy.

“Analysts claimed that rental rates had dropped significantly by about a third or so, and that was pretty consistent with our own experience,” Dowdy said.

At the end of the lease in June, when Dowdy and his wife moved into their newly purchased home, he noticed the apartment was listed for $3,000 with no incentives.

Housing analysts say Dowdy’s experience is indicative of a broader trend across Canada and Metro Vancouver in particular, especially as Canada prepares to reopen its borders.

Sites like Liv.rent, Padmapper and Rentals.ca say the average rental rate in Metro Vancouver is still lower than it was before the pandemic, but those numbers are starting to climb.

Highest vacancy rate since the ’90s

Eric Bond, a senior specialist with the Canada Mortgage Housing Corporation, says the pandemic caused a decrease in demand from key renter groups like international immigrants and service industry workers.

Bond says it also brought on more supply as some homes were converted from short-term vacation rentals into long-term rentals.

As of last October, the vacancy rate in Metro Vancouver had risen to 2.6 per cent from 1.1 per cent.

CMHC’s rental market analysis detected a slowdown in rental price increases, but not a decline. However, its annual rental housing report includes only purpose-built rentals as well as long-term tenancies with rents protected by provincial law.

Reports from sites like Rentals.ca, Padmapper and Liv.rent, which scrape data from new rental listings on the market, show a decline overall from pre-pandemic rates with a gradual increase over the last month or two.

‘Now’s the time to try and look’

Nathan Lauster, an associate professor of sociology at the University of British Columbia, says he’s not surprised to see rents beginning to rise, although he warns that the situation varies across the region.

Lauster suspects rents within Vancouver will be likely to start rising first because it has several post-secondary institutions and language schools to attract international students. It’s also a big source of jobs for many new immigrants.

Rates in other municipalities in the metro area are likely to be different mainly because they have such low rental housing stock to begin with, he says.

His advice for renters in Vancouver thinking about moving?

“Now’s the time to try and look,” he said. “I do think that things are going to really tighten up again once we get to September.”

CMHC’s Bond says the return to normal will be gradual, however.

He points out that many international students and immigrants still face barriers in coming to Canada — including rates of COVID-19 infections in their home country or limited access to vaccines.

“I think it will play out over the next few years,” he said. “It’s not something that can be turned back on immediately.”

Bond says B.C. was fortunate during the pandemic to not have its construction sector shut down, so new rental housing starts were able to continue.

There are currently 10,321 rental apartments currently under construction in Metro Vancouver — a number he says is encouraging but still not enough to ease the tight rental market that has persisted for years.