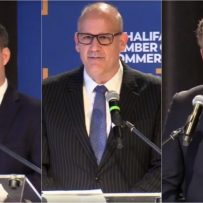 Nova Scotia’s emergency rent cap will expire in the next seven months, and as the provincial election campaign gets underway, party leaders are explaining their plans to make Nova Scotia affordable for those who rent their homes.

On Tuesday morning, the NDP made a platform promise of permanent rent control through legislation called the ‘Rental Fairness and Affordability Act.’ It would set the previous tenant’s rent as the base for increases, tie allowable annual increases to a measure like the Consumer Price Index, and limit additional increases associated with renovations, added services or exceptional cost increases to the property owners.

“It’s important to remember that they have rent control in Montreal, Toronto and in Vancouver,” said Leader Gary Burrill at the announcement.

“Is there anybody anywhere that thinks development in Montreal, Toronto and Vancouver is being inhibited by the situation? I don’t think so.”

In April, Liberal Leader Iain Rankin suggested that rent control measures put in place to prevent evictions during the COVID-19 pandemic could stick around after the declared state of emergency.

He changed his tune however, after the May release of the Nova Scotia Affordable Housing Commission’s report, which recommended rent control end with the pandemic. It listed 17 recommendations and 60 action items, including the creation of new incentives to boost the supply of affordable rental units.

It also advises politicians comb through existing legislation for renter protection opportunities and measures that could improve tenant-landlord relations, in addition to fast financial support for Nova Scotians who face renovictions, and the development of possible retention plans for long-term renters at risk of being priced out of their neighbourhoods.

Rankin has committed to implementing all of those recommendations.

“As long as the (housing) supply increases, that would be my condition, we have the right investments by endorsing their other short-term recommendations to add 900 units,” he told Global News on Tuesday. “So if that market situation changes to enable more supply in the market, then rent control’s not needed.”

Tim Houston, leader of the Nova Scotia Progressive Conservatives, has also taken a stance against rent control. On Tuesday, he said his party would support incentives that encourage both developers and non-profits to build in Nova Scotia, and the government has lots of land available for building.

“The answer to the housing crisis is more housing stock,” he said.

“I do not believe that rent control will stimulate the construction of more housing stock. As a matter of fact, I think it will reduce the housing stock … That means we need to stimulate more economic activity, we need to make sure those not-for-profits can construct housing.”

Like Rankin, he said he would fully implement the housing commission’s report.

All three party leaders acknowledged that rent affordability is a complex issue, intertwined with the cost of other goods and services, people’s salaries, and other factors that impact their ability to pay the rent.

Burrill said the commission’s report made a “fundamental mistake” in its determination on rent control.

“To a great extent, this has to do with fairness — we’re not talking about inventing something here,” he said. “Today, a majority of Canadians are protected from sudden, traumatic unsubstantiated rent increases. This exists in five provinces.”

Jim Graham, executive director of the Affordable Housing Association of Nova Scotia, said rent control is “a bit of a blunt instrument.” Graham is a member of the NS Affordable Housing Commission and was part of the team that drafted the recommendations to government.

“If you have 70,000 households in the province, not every household is in need of rent control,” he explained. “Secondly, it’s been shown over time that prolonged rent control will stifle new development. There’s no incentive if rents are capped always.”

Graham said he thinks implementing the commission’s report is a good step for whichever party leads the next government.

The NDP said Tuesday that cities with rent control have better housing supplies overall, and a 2011 analysis of Manitoba’s rent regulation program found that “well-designed rent regulations can improve the economic security of tenants, and at the same time, have a beneficial effect on the market’s efficiency.”

In the past year, the Nova Scotia chapter of ACORN, an independent tenant advocacy group, has led several protests for affordable housing measures in the province, including rent control.

Aidan Tompkins, treasury-secretary for the Halifax-Peninsula, said he doesn’t believe any measures apart from rent control will provide Nova Scotians with the reassurance that’s needed.

“When they speak to us, they speak persuasively and convincingly, then when it comes down to crunch time and they have to pass a bill along, they just cut out the meat of it and it doesn’t have any teeth anymore,” he said.

Kevin Russell, head of the Investment Property Owners Association of Nova Scotia (IPOANS), said he’s looking forward to the implementation of the commission’s report, and to seeing what incentives the parties propose for rental unit construction in the province.

A March report commissioned by IPOANS found that “rising rent is not the factor that is stretching overall affordability the most” in Nova Scotia, and rent control undermines the chances of success for small rental operators. It recommended waiving development charges, and higher rebates on affordable units as among its five major measures to combat rent affordability.