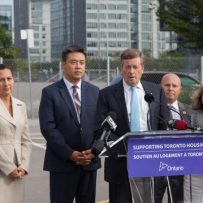 This morning, Mayor John Tory was joined by Ontario’s Minister of Housing Peter Milczyn and other municipal and provincial representatives in Toronto’s West Don Lands, to announce the initiation of a process to secure a developer for several surplus provincially-owned land sites across the city. The development of the properties with mixed-income residential will include over 2,000 new rental housing units, with a minimum 20% of these units to be below market rents, while the remaining 80% of units will be at the low end of market rents.

The lots in question include two currently paved lots in the West Don Lands—including the site of today’s announcement at the southeast corner of Cherry and Mill Streets beside the TTC’s recently built Distillery Loop—as well as a through-block site at 27 Grosvenor and 26 Grenville streets, currently housing a parking garage and the low-rise former Provincial Coroner’s Office. Even before this morning’s announcement, the province had already begun the process of selecting potential developers for the sites, with Mayor Tory sharing that the public could “see some signs of activity on this [Cherry and Mill Street] site in a year or so.” 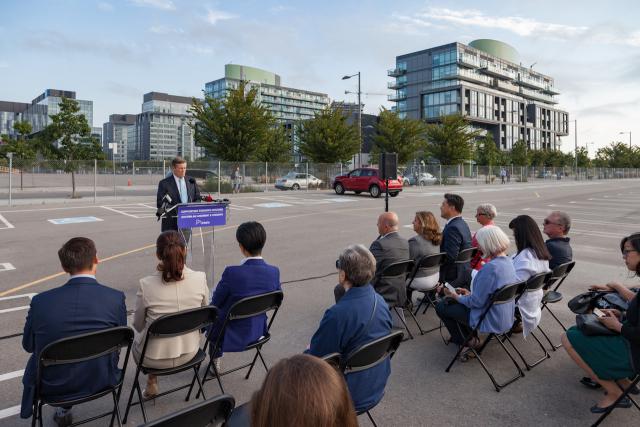 Mayor Tory speaking on one of the lots earmarked for new affordable housing, image by Jack Landau

According to Minister Milczyn, “as of tomorrow, these properties will be put on the market by CBRE Realty, a Request For Proposals (RFP) will be invited, and we expect the first round of proposals to come in about a month.” Milczyn also mentioned that one of the three new sites being targeted for affordable housing has already been pre-zoned, allowing for a fast-tracked development process that could allow construction to begin as early as next spring. The other two sites will require modifications to existing zoning by-laws. 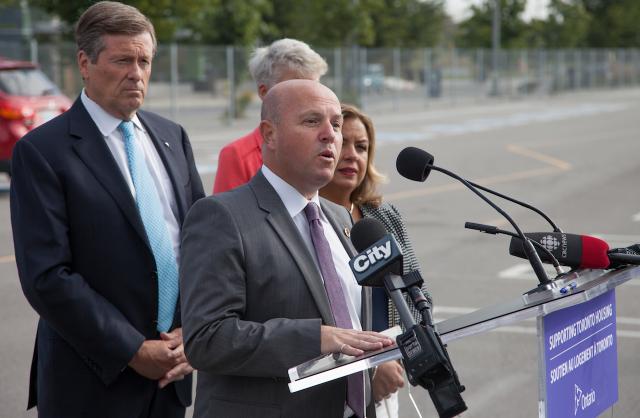 Due to the lower profit margins associated with affordable, purpose-built rental buildings, the province—while still generating revenue from these sales—will be selling the sites for below market value. A prepared statement from Ontario’s Minister of Infrastructure, Bob Chiarelli, reads “This is a unique and innovative strategy to transform surplus provincial lands into much-needed rental housing units for individuals and families, a key part of our Fair Housing Plan,” referencing the recently enacted plan from the provincial government to correct the red-hot housing market, and improve affordability for Ontarians.