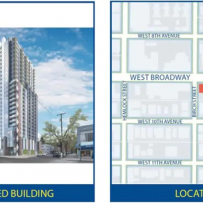 For years and years, the empty lot at Broadway and Birch Street was home to a Denny’s restaurant.

But some neighbourhood residents who live nearby say the proposed replacement is anything but a grand slam.

The proposal has been in the works for more than a year and heads to a public hearing on Thursday, with council voting after hearing from citizens.

Given the number of people expected to phone in for the virtual meeting, it’s hard to predict when that vote might be.

“When I look at central Broadway though, it’s not out of place.”

The Denny’s site was sold for $26 million in 2016 to Jameson Development Corp., and in 2018 council approved a 16-storey market rental tower on the site.

But that was before the city made changes to its Moderate Income Rental Housing Pilot Program, a policy that allows developers to apply for taller buildings if about 20 per cent of units are set at below-market rates.

The city says in this case, it would mean approximately 58 affordable units, with average starting rents at $950 for a studio and $2,000 for a three-bedroom unit.

“I see a lot of young people, I hear them on the bus saying that I have to move out of Vancouver, I can’t afford to work here anymore,” said Mortensen.

“This project answers the needs of those people.”

Crook argues the timing of the new rezoning proposal contravenes city rules. And while he had no problems with the previous 16-storey approval, he believes a project this tall — higher than any building on West Broadway — would set a bad precedent, particularly as the city is in the middle of consultations for the overall Broadway Corridor Plan.

“It could justify other buildings … we’ve heard rumours, for example, of 40 storeys at Broadway and Granville,” he said.

Consultation during a pandemic

Adding to the controversy is the city replacing in-person public hearings with virtual ones during the COVID-19 pandemic.

“I’m not particularly happy about the virtual process,” said Crook.

“There are people who probably won’t participate because the don’t like [it] … to me the better answer would have been to say ‘let’s wait until we’re back in council chambers in September.'”

However, the city has already conducted several virtual meetings, including one where they approved a 60-storey tower downtown.

And while Crook has plenty of issues with the development, Mortensen believes they’re much the same as other complaints against tall buildings on the city’s west side.

“A lot of people are trying to fearmonger, saying this is going to be a precedent,” he said. “That’s not the case.”