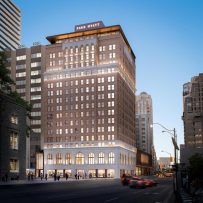 Oxford Properties has torn the wrapping off the design of its Park Hyatt hotel makeover revealing what it calls an artistic homage to Canada that includes the preservation of the brick and limestone facade on all sides of the landmark south tower at Avenue Rd. and Bloor St.

When it reopens about a year from now, that building will house 65 luxury one- and two-bedroom rental apartments, including five penthouse suites, known as The Residences at Two Avenue Road.

It will connect to the 219-room north hotel tower via an expanded podium link that replaces the old path. The hotel will feature a mix of suites and rooms that have been renovated from the studs up, said Oxford vice-president of development Carlo Timpano.

The hotel lobby and a lounge called “The Living Room” will be incorporated into the podium. A third-party restaurant with a roof deck will look directly down Avenue Rd. and east to Yorkville. There will also be 20,000 square feet of high-end retail in the south tower along Bloor St. and Avenue Rd.

The art deco dome structure is being removed and the patio restored to the Park Hyatt’s fabled rooftop bar so that it reverts to the space that existed prior to a 1990s renovation, he said. The 18th-storey bar was known for attracting celebrities in town for the Toronto International Film Festival and some of Canada’s well-known writers and politicians.

“This address has a history in the hearts of many Torontonians really since the 1930s when it opened up,” Timpano said.

Dating back to the 1800s, the site had roots in the lodging business as the Tecumseh Wigwam, a small house that acted as a sometime tavern and way station for weary travellers making the arduous journey between north and south Toronto.

Construction of the modern hotel began in the 1920s but stopped during the Great Depression. It finally opened as the Park Plaza in 1936 with a mixture of apartments and hotel guest suites.

Timpano believes the current restoration is the first highrise adaptive reuse project where the entire heritage structure is retained.

The all-Canadian design team includes KPMB Architects, known for its work on the Royal Conservatory of Music and Massey Hall. The Park Hyatt’s Group of Seven-inspired interiors are being designed by Studio Munge, which is also behind Toronto’s One Bedford and Nobu residences, and the Park Hyatt Los Angeles.