PANDEMIC CREATING A ‘NIGHTMARE’ FOR LOCAL LANDLORDS AND TENANTS 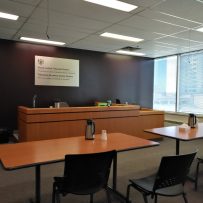 Pandemic-related delays in landlord-tenant hearings are complicating an already stressed housing market, say those who have been waiting months for hearing dates.

Ontario’s introduction of another shutdown over concerns related to the spread of COVID-19 is pushing those fears into overdrive.

While many tenants have been waiting to get hearing dates before the Landlord and Tenant Board to resolve their housing issues, landlords have also started speaking out about not being able to pay their bills due to delinquent tenants.

There is a concern that given the lingering frustration of lost income and mounting unresolved issues – many delayed now for a year or more – some landlords are giving up and selling their property.

One property owner said her family’s first and only foray into rental property ownership in Barrie has ended in complete disaster. Garbage now litters the place, there are holes in the walls and the tenants themselves have had arguments requiring police attention and two have stopped paying rent.

She still hasn’t been granted a hearing date for a Landlord Tenant Board application made last June.

During that waiting period the owner said one tenant received a quick date for a grievance but she didn’t show up to the hearing and it was dismissed while the landlord’s case remains pending.

The family asked that their name not be used for fear of compromising the sale of the house which closes in January. She expects the new owners will live in the house and it will be taken off the rental market.

“We are small-time landlords, this was our first investment property, ever,” said the daughter of the couple who purchased the house. “It ended up being way more of a nightmare than anything.”

Most of the nearly 800 units Rob Hilton manages for A.G. Secure Property Management Inc. are low-rise structures with four or fewer units for individual or small-scale residential landlords. He says the “anemically low” rental supply in Barrie and most of Simcoe County takes a hit every time a house is sold and is no longer available for rent.

The Canada Mortgage and Housing Corporation pegs the Barrie area’s “purpose-built” rental stock, mostly apartment buildings, as 20 to 25 per cent, meaning that most people must turn to condos, apartments in low-rise buildings and those created in houses or duplexes for rental housing.

Most of those, said Hilton, are owned by people who have full-time jobs and have invested in the real estate market for future security.

While the vast majority of tenants create no issues, when problems do occur with no immediate prospect of resolution, the landlord, often one with a day job, might decide it’s not worth the bother and they sell.

A new owner who decides to continue renting out the property might purchase on the agreement that the units are vacated and if that happens any rent control protections disappear when a new tenant arrives.

But there is also a risk that the new owner wants the house for themselves and it is removed from an already tight rental stock.

“Now what you’re seeing is somebody who used to rent a condo for $2,300, a two-bedroom condo, is saying: ‘I can come to Barrie and rent a three-bedroom townhouse for $2,300. I don’t have to push any elevator buttons, I can go outside to the backyard and let the kids play where I can’t do that in Toronto.’ So now you’ve got the price of rent going up, but you also don’t have the supply,” he said.

“The number of landlords getting out (are going up), because they don’t feel protected, as a business.”

Of the area’s purpose-built rental units, the CMHC pegged the vacancy rate at 3.2 per cent in 2019. Meanwhile, online property rental platform PadMapper.com found one-bedroom apartments were renting for an average of $1,440 in Barrie in November, ranked as the eighth most expensive city in Canada in which to rent.

The Landlord and Tenant Board started to gradually get back into action Aug. 1 after the pandemic shutdown in March. It is conducting video conference, teleconference and written hearings with consideration being given to some in-person hearings.

According to Tribunals Ontario, 4,597 hearings were scheduled to be heard by the Landlord and Tenant Board for December relating to all types of applications. Between Dec. 22 and Jan. 4, it is only scheduling and hearing tenant applications and urgent matters.

Prior to the pandemic, the timeline for a hearing before the Landlord and Tenant Board was 60 to 90 days in Barrie, said paralegal Erli Bregu, co-owner of XPOLICE in Barrie with locations in other Ontario cities.

By March, the board had suspended hearings which didn’t resume until mid-August when it adopted an online platform through which to hold virtual hearings. At that point, the new cases that arose during those five months were piling up on top of the cases which had been delayed. And then evictions were once again allowed as well.

Bregu said the online hearings lumbered along as users struggled with the technology which also imposed limitations. In the past, if the landlord and the landlord had each filed an application, they could be heard at the same time if time allowed. The virtual system couldn’t allow for that, meaning two separate hearings would have to be held.

“You think (the virtual hearings) would be faster, but in our experience, it hasn’t been,” he said. “There’s still growing pains.

“Applications that were put in last year in November and December (2019) from landlords or tenants … they’re getting heard now,” he said. “In some cases tenants have not been paying rent sometimes from October or November of last year up to now.”

Bregu said tenants were prioritized during the pandemic because they’re seen to be vulnerable if evicted. Although landlords are not at risk of physical harm, he added that not all are in the position to cover their bills if rent remains unpaid, particularly for an extended period. And there is risk of increased damage to property as time goes on.

But tenants have been left in a similar position. As a result of the delay in having their application being heard, they may have to continue living in circumstances deemed unacceptable.

“We can see both sides of it and how frustrating it is,” he said. “We have somebody with no electricity, no running water, no plumbing in the house and we’re still four months waiting for a hearing.

“We actually got an urgent request for a hearing approved…. But all that means is when one becomes available they’ll assign one.”

During the pandemic, Bregu said there was an influx of applications relating to arrears in rent resulting from a belief by some tenants that they were not required to pay rent during the pandemic.

The result, he said, is that both tenants and landlords are in flux, forced to live with the problems until they can get before the board.

“Nobody else out there can help you. It’s a decision that has to be made by the board,” he said.

The frustration and loss of income resulting from lost rent has led some landlords to simply sell their property, he said. The net result is that that would reduce the availability of rental units in a market identified as not having enough.

“And now we don’t have rental space and this causes a shortfall in the market and then the rental prices go up,” he said. “It’s a snowball effect that nobody foresaw. It’s taken its toll on everybody.”

“I have landlords that say: ‘I’ll never rent again.’…. They feel defeated.”