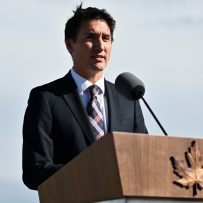 The federal government intends to temporarily hike GST rebate cheques in a bid to ease some of the hurt of inflation for lower income Canadians.
Cabinet ministers are gathering ahead of the fall sitting of Parliament with the economy and the cost-of-living crisis top of mind.

Two federal sources familiar with the plan say it will look to double some GST payments for six months, include help for Canadians struggling to pay their rent, and launch the first step of a national dental-care program.

The Canadian Press granted the sources anonymity to discuss matters not yet made public.

The Liberals already promised a $500, one-time top up to the Canada Housing Benefit and to start phasing in a national dental-care program in last April’s budget.

Both are key demands from the NDP in the confidence and supply agreement that party made with the Liberals.

NDP Leader Jagmeet Singh has made it clear that not moving on those priorities could kill that pact that would see his MPs support the Liberal minority government on key votes until 2025.

Singh has also been asking for top-ups to the GST rebate and Canada Child Benefit, but neither were included in the agreement with the Liberals.

The Canada Child Benefit is not expected to be included in today’s plan, but an increase to GST payments for six months is part of it.

Canadians with low and modest incomes based on their annual tax filings receive a GST cheque every three months as a type of rebate for some of the GST they pay.

The current benefit is up to $467 a year for a single individual with a maximum income of just over $49,000, $612 for married or common-law couples, and another $161 for children under 19 years old. The amount received is adjusted depending on income.

The payments are indexed to inflation but the increase in 2022 is based on inflation in 2021, which means payments for the GST credit and most other federal benefits went up 2.4 per cent.

Inflation averaged more than twice that in the first seven months of 2022.

The cabinet meeting comes nearly one year after the Liberals held on to power in the 2021 election, but also days before a new Conservative leader is named.

Trudeau kicked off Wednesday’s cabinet meeting with a speech acknowledging there are big challenges facing Canada and the world, but that he is energized to keep going and bring about the solutions the Liberal government is planning.

His comments, confirmed to The Canadian Press by two sources with knowledge of what was said, matched his repeated assertions, both publicly and privately, that he has no intention of stepping down before the next election.

Ministers were briefed at their meeting Wednesday afternoon by Michael Sabia, who is the deputy minister of finance, and private-sector economists, who helped paint a picture both of Canada’s economy and inflationary pressures, and the global situation.

Finance Minister Chrystia Freeland said Wednesday there would be discussions around the table about how best to help Canadians most feeling the pinch of inflation, but without disrupting the federal fiscal balance.

The Liberal budget promised to introduce a national dental-care plan starting with coverage for children under the age of 12 in families with a household income below $90,000.

The first phase was expected to cost $300 million, rising to $1.7 billion annually once a full dental-care plan was implemented.

It is a complicated process because health delivery is a provincial responsibility and most provinces have some sort of dental-care coverage for low-income families already.

A $500 one-time top up to the housing allowance this year was budgeted to cost $475 million.