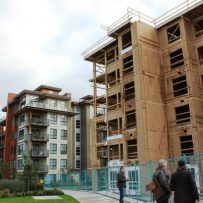 There’s big news for Ontario’s building industry that could have a major impact on how townhomes and mid-rise condos are built. Since Jan. 1, revisions to the Ontario building code allow wood-frame construction for residential and office buildings up to six storeys in height.

The building industry has been pushing for this for quite some time, with the allure of  a 10 to 15 per cent price advantage over traditional construction costs and a much-needed boost to Ontario’s sluggish lumber industry.

“We’ve seen these (townhomes) done traditionally with wood frame, and perhaps with the advent of the building code change to allow for up to six-storey wood construction, we may see a new iteration, a new form of condo townhome coming out of this new legislation,” says Paul Golini, co-founder of Empire Communities.

Ann Borooah, chief building official at the city of Toronto, says that we now have Ontario building code regulations in place that enable this kind of construction.

“If somebody comes in with an application that reflects that, we can now look at it using the regulations and it shouldn’t create a significant difference between any other type of construction from that point of view.”

British Columbia and Quebec lead the way in this type of construction. B.C. increased the maximum height for wood-frame residential construction from four to six storeys in April of 2009. Ontario has been limited to four storeys since 1992.

“What this enables you to do is to build a more apartment-form of building where you have a number of units on the floor, always accessed by elevator given their height, that can be built out of wood primarily as opposed to the traditional method,” says Borooah. “We understand the building community is quite interested in this option. We may get some quite interesting buildings out of it.”

•    So will we ever see skyscraper condos built mostly out of wood?  It’s unlikely, but builders say the new rules pave the way for taller structures to come.

•    “I’ve been involved through BILD. I went to Copenhagen to look at this product and they’re going up to nine storeys. You have to deal first of all with the issue of perception and safety, and we’re dealing with all of that right now,” says Paul Golini. 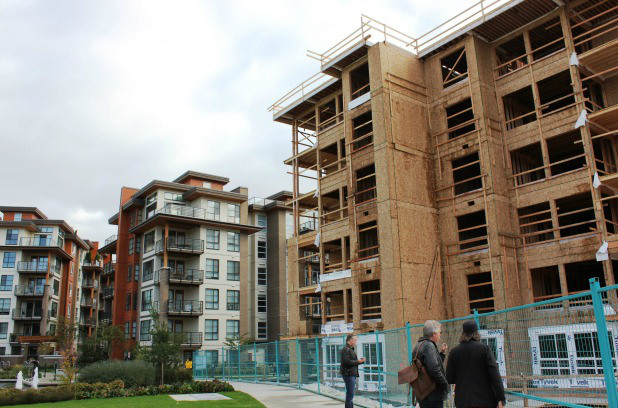