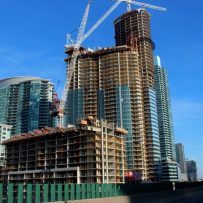 Ontario’s condo boom could prove to be a risk to the country’s economy, Fitch Ratings warns in a new report today.

The New York-based ratings agency said it considers home prices in Ontario to be 25 per cent too high, slightly above its estimate for Canada’s housing market as a whole, which it warned last year was around 20 per cent overvalued.

There are more than 80,000 condo units under construction across Ontario, most of them in the Greater Toronto Area. That’s 50 per cent higher than just four years ago, although the number of new housing starts has fallen from its peak in 2012, Fitch said. In the face of so much supply, condo prices have remained flat across the province.

Therein lies the problem, according to Fitch.

“As a large number of units come on line, prices may soften, which could reverberate throughout the Canadian economy,” Fitch director Stefan Hilts wrote. “Lower prices would reduce the incentives to build further units, which could hit employment in the construction sector that has been buoyed by continuing price growth. This in turn could lead to more significant downside exposure.”

Canada’s housing market is arguably one of the most closely watched by global observers. Last month, The Economist magazine pegged Canada among the world’s most overvalued housing markets, saying prices were about 35 per cent too high. The International Monetary Fund has also flagged rising levels of uninsured mortgages and high household debt as a risk to the economy.

Opinions on the health of Canada’s housing market vary wildly, however, from those who say the market is primed for a correction to those who argue houses are undervalued.