Ontario to open up to 150 marijuana stores, separate from liquor sales 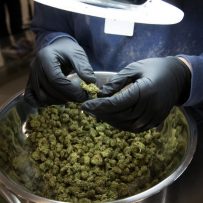 TORONTO — Ontario is the first province out of the gate with a detailed plan to sell and distribute recreational marijuana when Ottawa legalizes it next summer.

The Liberal government announced Friday that it will sell marijuana in as many as 150 dedicated stores run by the province’s liquor control board. Those looking to purchase marijuana when it becomes legal across the country will be subject to the same age and usage restrictions currently in place for alcohol, said Attorney General Yasir Naqvi.

The process of purchasing recreational cannabis will closely mimic the one currently in place at the Liquor Control Board of Ontario.

Naqvi said residents 19 or older will be able to purchase marijuana at separate retail outlets or through a website run by the LCBO that should be ready for business by next July.

Consumption of legal weed will not be allowed in public spaces or workplaces and should be confined to private residences, Naqvi said. However, he said the government will explore the possibility of allowing marijuana-licensed establishments in the future.

The province expects to have all the stores operational across the province by 2020, with the first 40 stores opening next summer. Those stores will only sell marijuana and not alcohol.

The federal government introduced legislation in April with a goal of legalizing and regulating the use of recreational pot by July 1, 2018, but left it up to individual provinces to design their own distribution system and usage regulations.

One of the government’s priorities, he said, involves clamping down on illegal distribution channels. He made it clear that will include dispensaries that have cropped up in recent months in anticipation of widespread legalization.

“Illicit cannabis dispensaries are not legal now and will not be legal retailers under the new model,” Naqvi said. “… These pot dispensaries are illegal and will be shut down. If you operate one of these facilities, consider yourself on notice.”

Naqvi said setting the minimum purchasing age at 19 is intended to protect youth from potential drug use. The new regulations, however, will also contain language allowing police to confiscate small amounts of pot from those under 19 without incurring criminal charges.

Asked about expected revenues, Sousa could provide no estimates, saying the market conditions and federal tax levels will impact the bottom line and are unclear.

“Frankly, this is uncharted territory and we’re going to have to monitor it and see how it develops,” Sousa said.

He said the government has been working on the pot file for about a year.

“We are running out of time,” he said. “We have to be prepared by next year.”

Sousa could not say what the start-up costs for the stores will be but expects they will be recovered over time.

He said legislation regulating the control of marijuana will be introduced in the fall.

The federal government has pledged to work with provinces and commit resources to pot-related needs like public security, policing and educational campaigns.