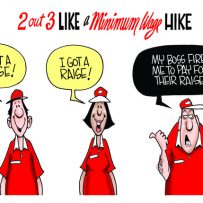 The province shed 50,900 jobs total from December 2017, according to the Statistics Canada report.

It gained approximately 8,500 full-time positions but lost roughly 59,300 part-time gigs, according to data provided by the agency, which noted the figures are rounded.

Some economists said it’s possible Ontario’s minimum wage increase played a role in those declines, but noted it’s important not to read too much into one month of data.

The province hiked minimum wage by $2.40 per hour to $14 per hour at the beginning of the year, a move some economists warned could result in mass job losses as employers look to reduce costs.

Overall, economists are divided on how minimum wage increases play out. Some research has suggested a reduction in hours or jobs follow mandated wage bumps, while other studies suggest no long-term connection between wage increases and dips in employment rates.

“We lost a whole bunch of part-time jobs at a time where the minimum wage went up,” David Prince, founder and president, Harbinger Capital Markets Research told BNN on Friday. “Well, what should be calculated is the number of businesses that foreclosed, because that is more telling. Those jobs aren’t coming back. I’ve heard all the arguments coming from the statistics people, but the reality is, when you close businesses, they’re gone.”

The 59,000 figure is a “whopping” one, said Matthieu Arseneau, senior economist at National Bank Financial Markets, in a note.

It “may be a sign of adjustments made by corporations coping with a minimum wage surge,” he said, noting young people ages 15 to 24 lost 24,000 part-time positions.

However, economists also pointed to possible connections between Ontario’s minimum wage and Canada’s stronger average wage growth of 3.3 per cent in January.

“One of the positives in today’s release was the fact that wage growth picked up, said Craig Alexander, chief economist at the Conference Board of Canada.

The board’s modelling suggests the increase will reduce the number of jobs created in Ontario this year by roughly 40,000.

Ontario’s mandatory minimum hourly rate is set for another bump in January 2019, when it will rise to $15.

The province of British Columbia announced Thursday it too plans to raise rates for its lowest paid employees over several years.

Some have already criticized the increase as being too fast, noting it may be difficult for small business owners to adapt to the increased labour costs.

– with files from BNN