ONTARIO PUSHING THROUGH CHANGES TO TENANCY LAW AS CRISIS LOOMS 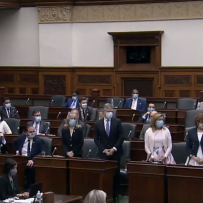 The Ford government is pushing through changes to tenancy law that will make it easier for landlords to evict tenants in Ontario even as the COVID-19 pandemic puts hundreds of thousands of renters in an increasingly precarious financial situation.

Specific measures in Bill 184, perhaps ironically titled the “Protecting Tenants and Strengthening Community Housing Act,” appear likely to exacerbate a looming rental housing crisis where tenants who have lost their jobs could be thrown out of their homes in a wave of mass evictions.

The bill, first introduced at Queen’s Park days before COVID-19 emergency measures were put in place in March that effectively locked hundreds of thousands of workers out of their jobs, passed second reading Wednesday.

It could be quickly moved through a Progressive Conservative-controlled committee before coming back to the legislature for a third and final pass in coming weeks.

If passed into law in its current form, tenants will no longer be able to raise issues of persistent disrepair during an eviction hearing at the Landlord and Tenant Board (LTB), the provincial tribunal that hears residential tenancy disputes, and those who are unable to meet the terms of a rent arrears repayment plan will face immediate eviction.

While Premier Doug Ford placed a moratorium on evictions during the pandemic early on in the emergency response — saying renters facing a choice between rent and food should choose food — he has given no indication that leniency will be offered in the coming months.

In fact, the measure allowing for immediate eviction after a missed arrears repayment takes that option out of the hands of the LTB. Critics say his government has largely left renters at the mercy of landlords.

“The notion that Doug Ford has tenants’ backs is laughable in the context of ramming through this bill when no one’s watching,” said Brian Doherty, a member of the Parkdale Organize tenants group that is building a collective resistance to unfair landlord practices.

The move is one of the first measures introduced to the pared-down legislature that is not directly related to the COVID-19 crisis. Opposition members broadly argued it should have been postponed until after the summer when the lingering effects of the shutdown will be more apparent.

Green party leader Mike Schreiner said he’d prefer to see the bill held over until much later in the year.

“It’s an inappropriate piece of legislation to introduce at this time,” he said. “We should be focused on legislation that is directly related to the COVID-19 crisis.”

As June rent comes due, both tenant and landlord groups are bracing for even more renters to fall into arrears, with tenant advocates warning of a wave of evictions once the moratorium is lifted.

The negative effects will be most keenly felt by younger people, who are both more likely to live in rentals and who have lost work at a disproportionate rate relative to the overall workforce since the pandemic shut down retail stores, bars and restaurants in mid-March.

The express eviction proposal is also worrying for the Opposition NDP.

“As soon as they miss a payment, that’s it. The sheriff can knock at the door and you’re out,” said the NDP’s tenant rights critic Suze Morrison. “It’s going to allow landlords to fast-track evictions of tenants, which I found deeply problematic.”

The NDP is calling for a rent subsidy of up to $2,500 over four months for tenants who have lost income due to the pandemic, and for increased legislative protection against lockout and evictions.

“We can’t rely on the kindness of individual landlords to help people get through this crisis,” Morrison said. “People need the government to step up with real support.”

She cited the case of a tenant in her downtown Toronto riding named Emily who recently received an eviction notice from her landlord one hour after offering to pay as much of her rent as she could.

Emily had lost all her income due to the pandemic and is trying to survive on federal emergency benefits. But with her 400-square-foot apartment costing her $1,500 a month, she has only $500 left from the CERB to cover food, utilities and medications related to a recent emergency dental surgery.

“There’s simply no way to work the math, so she went back to her landlord and said she could afford to pay $1,100,” Morrison said.

The N4 form arrived soon after, meaning Emily has two weeks to make up the difference or risk having her landlord apply to have her case added to those backing up at the tribunal.

While the LTB typically receives between 3,500 and 4,000 L1 eviction applications from landlords each month, that number dipped to around 2,500 in March and to 1,400 in April, a spokesperson said. But none by the most urgent cases are currently being heard.