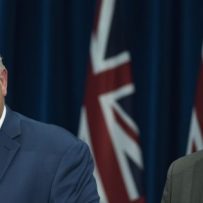 It would be a mistake for Ontario’s Progressive Conservative government to contract out eviction enforcement, one tenant advocacy group says.

“When people have to be evicted from their home, there’s some pretty nasty situations going on like family breakdowns, illnesses, deaths in the family, bankruptcy, poverty, mental health,” said Kenn Hale, the director of advocacy and legal services for the Advocacy Centre for Tenants Ontario (ACTO).

Internal documents obtained by The Toronto Star show the government is considering the use of private bailiffs to evict tenants out of their homes. Hale’s colleague, ACTO policy analyst Mary Todorow, confirmed to HuffPost Canada that it was raised at a closed government consultation she attended on Feb. 1 as a way to “streamline the eviction process.”

Currently, only public servants known as public enforcement officers can remove tenants once an eviction is ordered.

Landlords depend on rent payments for their livelihoods, he said, and going months without rent is a major financial strain.

“A lot of small landlords are one missed rent payment away from big troubles.”

A spokeswoman for Steve Clark, the minister in charge of housing, would not confirm or deny that the PCs are looking at the idea of private eviction bailiffs.

The idea “is neither the current policy of the government nor proposed legislation at this time,” Julie O’Driscoll, Clark’s director of communications told HuffPost in an email.

Todorow, the ACTO representative who attended the government’s consultation, said they fought back when the former Liberal government considered the same thing in 2016.

“It was like Groundhog Day,” Todorow told HuffPost of the PC consultation. “We’ve already gone through this.”

In a submission to the Liberal government three years ago, ACTO outlined the reasons why it opposes this policy.

Sometimes landlords and tenants misrepresent their situation, ACTO wrote in its paper, so the enforcement officer needs to be impartial. Paid bailiffs might just do as the landlord says, because that’s who is paying their fee.

“Simply put, a lock-out, even if warranted and lawful, is a traumatic event for a family,” ACTO wrote.

“Children simply never forget a forced eviction from their home and you cannot put a price on a responsible, well-mannered, professional coming to the door to do an undeniably terrible thing.”