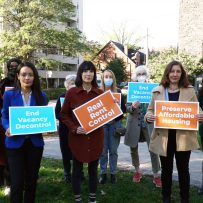 Ontario NDP MPPs say they plan to reintroduce a bill that would prevent landlords from raising the rent for new tenants beyond the guideline set by the province and ensure new tenants pay what the last renters paid.

Jessica Bell, who represents University-Rosedale in Toronto, told reporters at Queen’s Park on Wednesday that the private member’s bill would help to stabilize rents in Ontario at a time when they are skyrocketing.

“We want to ensure that everyone in Ontario lives in a safe and affordable home that meets their needs,” Bell said. “That is not the reality today. We have a terrible affordable housing crisis across Ontario.”

The provincial residential rent increase guideline for 2023 is 2.5 per cent, but that guideline doesn’t apply to residential units that have been vacated. Bell said the province has an estimated 1.4 million renter households and many tenants are spending more than 30 per cent of their income on rent. She said Toronto, in particular, has become too expensive for the people who work in the city.

The Ontario NDP is proposing that rent increases be tied to residential units instead of tenants. She said the bill would create rules for what the party calls “lawful rent” for new tenants.

Bhutila Karpoche, who represents Toronto’s Parkdale-High Park, and Terence Kernaghan, who represents London North Centre, joined Bell at the news conference. They introduced the same bill in 2021, along with Joel Harden, an NDP MPP who represents Ottawa Centre, but it didn’t get past second reading.

Karpoche said the bill, which would amend the Residential Tenancies Act, would end the incentive for illegal evictions, such as renovictions, which occur when landlords evict tenants illegitimately by saying they need to do renovations or repairs. The legislation, she says,.would create new rules for rent that a landlord can charge to a new tenant.

The bill would also require the Landlord and Tenant Board to establish a rent registry that would require landlords to disclose information. The aim of the registry would be to prevent rent gouging by landlords, she said.

Karpoche said vacancy decontrol, which is in place in Ontario, has contributed to the province’s housing crisis. Vacancy decontrol allows landlords to raise the rent without limit when a unit becomes vacant, and according to the NDP, it creates an incentive for landlords to evict tenants.

“Tenants cannot afford to live with the fear of unfair and illegal evictions and skyrocketing rents and Ontario cannot afford this problem,” she said.

Diana Chan McNally, a community and crisis worker at All Saints Church Community Centre who spoke at the news conference, said unhoused people may come from different walks of life, but what they all have in common is they cannot find and afford housing.

“Rents are on the rise, but incomes are not matching. Inflation is through the roof. This makes people at increasing risk of homelessness and remaining so,” she said.

“It’s not just about supply. It’s about preserving affordability of the housing that already exists, particularly rental housing that is accessible and truly affordable for unhoused and very low income individuals.”

In question period on Wednesday, Steve Clark, Ontario’s municipal affairs and housing minister, said in response to a question about tenant protections that the province promised it would protect existing tenants by implementing rent control.

“We followed up with rolling back what could have been a 1.5 per cent increase in the middle of the pandemic in 2021 and froze rents, which was unprecedented in many of the provinces and territories, but we want to build upon our success.”