ONTARIO LANDLORDS, BUSINESSES DON’T HAVE TO DISCLOSE COVID-19 CASES. BUT SHOULD THEY?? 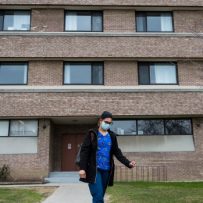 The province says no one has to tell anyone else if they get COVID-19. The same goes for businesses or landlords, should employees or tenants get sick.

But should you tell? Some businesses have decided they should and have gone public with cases.

Sobeys and Metro grocery stores keep a running list of locations with confirmed cases. Chains around Ontario like Petro Canada, the LCBO and McDonalds have all had employees get the virus — and acknowledged specific cases to media.

There’s a lot to weigh when deciding to disclose or not — a delicate balance of legal, ethical, privacy and public health implications, along with how people will react.

Public health units know who has tested positive and where they’ve been. But they rarely disclose locations.

Dr. Sudit Ranade, medical officer of health for Lambton County, hears from many people eager to know where a case has been confirmed — and can speak to why not all are made public.

“There are people who think ‘If only I knew that you found a case in this store, I would be able to protect myself,'” he said. “It’s actually in someways beneficial for them not to know exactly where COVID was detected … it might give them a sense of reassurance in places where they really shouldn’t be reassured.”

Through contact tracing, public health units track down people who could have come into contact with a confirmed case. Typically public health is contacting individuals. But there are exceptions. Toronto Public Health said it would tell residents in a building, for example, “if there was a risk to others at the building.”

Ranade would only disclose publicly if there was no other way of contacting someone who could be at risk. He recently put out a call looking for passengers who used a local taxi service after a driver tested positive for COVD-19; contact information wasn’t available for all passengers.

“The goal really is to achieve a good balance between transparency and privacy.”

University of Toronto ethicist Kerry Bowman said ethical disclosure depends on your level of risk to others.

If you are staying put in your house, not leaving at all and getting people to bring groceries, then you aren’t putting anyone at risk. “I do not see how there could be an ethical obligation there,” he said.

Bowman said with HIV, there’s no obligation to tell others outside of sexual activity, no matter how curious someone may be.

“It’s not fully analogous but it does come down to risk again. If you’re not creating a risk to other people, I do think it becomes a matter of privacy.”

He screened patients at a hospital during SARS and said people learn to lie, which becomes another ethical question. “People know exactly what you want them to tell you. If they’ve got a smaller, subtle cough, they’re not going to tell you.”

London, Ont., residential tenancies lawyer Joe Hoffer has been advising landlords to tell tenants if there is a confirmed case of COVID-19 in their building. (With exceptions for smaller buildings, where sick individuals could be identified.)

Hoffer has been sending around homemade template signs that clearly warn there is a case in the building. He’s encouraging landlords to post them at all building entrances, along with more information about symptoms and best practices.

Hoffer said if landlords chose to do nothing, they would be “wide open” to legal action.

“As long as a landlord has met their duty of care … they at least have a defence.”

Another consideration is how people may react to knowing they shopped at a store where an employee has COVID-19 or if there’s a case down the hall.

Some want to know. Others don’t. Dr. Ranade warns against creating “unnecessary panic.”

“People act in ways that may actually not be helpful and actually may harm the person who does have that disease.”

John Dickie, president of the Canadian Federation of Apartment Associations, wants landlords to consider whether their building is “panicky” or not before disclosing.

It’s not scientific, but he asks them to consider how the majority of tenants reacted to past stressful situations like power outages or heating issues.

“You worry 100 or 200 people and for three-quarters of them, they have nothing to do with that person other than riding the elevator,” he said. “That could create a panic in the building. That could cause people to want to move out of the building.”

Disclosure can be tricky in smaller places — like a restaurant with a tiny staff or smaller apartment buildings — where there’s a risk identifying exactly who has the virus. That becomes a privacy issue.

But Ontario’s information and privacy commissioner Brian Beamish warns that can’t be used as a blanket excuse for public health units and governments to not disclose information.

There’s currently inconsistency between public health units — for example, some are not providing details on how many cases are in long-term care homes. Beamish detailed what he thinks should be disclosed in a public letter: