Ontario’s Finance Minister “will be looking very closely” at a move by his B.C. counterpart to tax foreign real estate investors in the Vancouver region, as market watchers predict the push to curb speculation in Vancouver’s housing market will shift more demand to Toronto.

Charles Sousa told reporters he welcomed the B.C. government’s decision to implement a 15-per-cent increase to the property-transfer tax starting next week on people who are not Canadian citizens or permanent residents and purchase homes in Greater Vancouver. 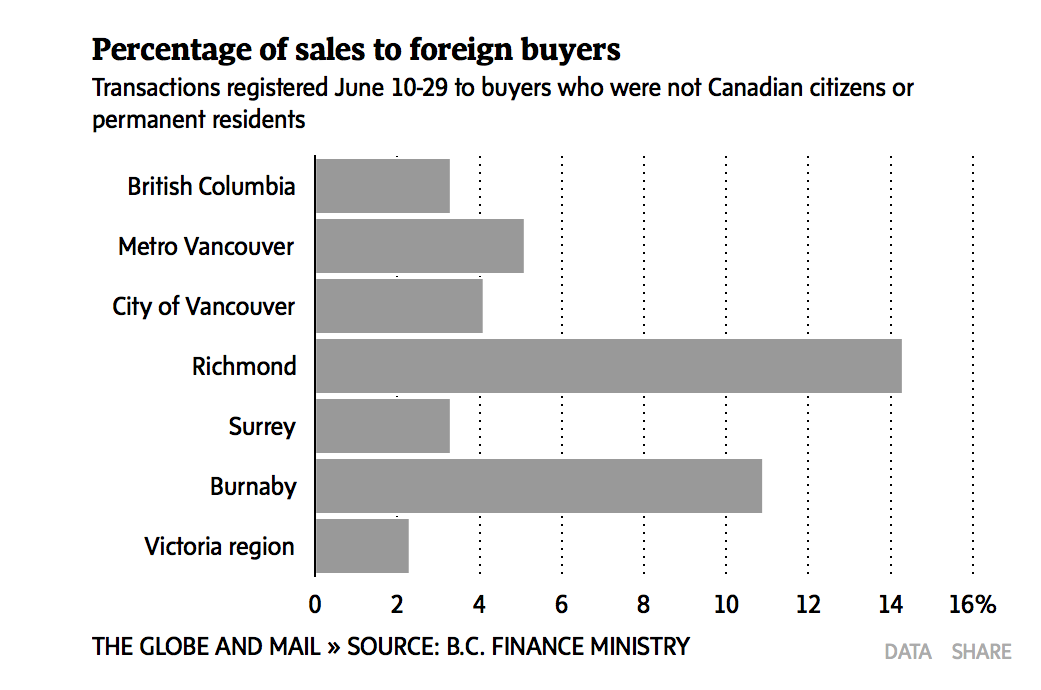 “ I welcome what [B.C.] is putting forward, and we’re certainly looking at whatever options can be made available,” Mr. Sousa said after a news conference on Tuesday.

But, he added, it is important to consider that any similar policies for Toronto could have knock-on effects to other parts of Ontario that aren’t experiencing the same run-up in house prices.

EXPLAINER: Real estate reform in B.C.: Everything you need to know

“So we’ve got to be cognizant of the impacts of those decisions,” said Mr. Sousa, who is part of a committee, alongside B.C. Finance Minister Mike de Jong and federal Finance Minister Bill Morneau, that is looking for ways to improve housing affordability in Canada’s hottest markets.

Several real estate industry watchers applauded the B.C. government’s decision, which came as the province released new numbers showing that foreign nationals bought nearly $885-million in residential real estate in the Metro Vancouver area between June 10 and July 14, about 10 per cent of the total value of all sales.

The extra money the tax is likely to bring to the B.C. government might encourage cash-strapped Ontario to follow suit, said John Andrew, director of Queen’s University’s Real Estate Roundtable. “You can bet the Minister of Finance of Ontario is really looking at that and thinking, ‘Wow, that would be great to have because it’s not even being paid by Canadian citizens.’”

Whether Ontario matches B.C.’s tax will likely depend on how many foreign investors shift their purchases to Toronto and add fuel to a housing market that is already tight. Benchmark resale-housing prices in the GTA have shot up nearly 20 per cent over the past year, with many realtors pointing to a severe shortage of new single-family housing.

Prof. Andrew said B.C.’s tax may push international buyers toward Toronto’s more affordable condo market, creating the sort of soaring prices and public outcry seen in Vancouver. “A number of these foreign investors may well look at that situation and say, ‘Forget it, I’m just going to go to Toronto, where there are no restrictions,’” he said.

The number of international buyers snapping up homes in the GTA and leaving them empty has increased this year, Toronto real estate broker Adam Brind said. The market is already struggling with a shortage of available resale listings and prices that have gone up nearly 17 per cent from last year.

A tax on non-resident buyers might help take the steam out of the upper end of the Toronto market, homes priced at more than $2-million, where demand has surged this year, Mr. Brind said. “It’s a great solution. Rather than saying foreigners can’t buy here, if you really want to, you’d better have a lot of money or a really good reason,” he said.

RELATED: How other countries have tried to deter foreign real estate investors

Bank of Montreal chief economist Douglas Porter said the trend of foreign investment in Toronto’s housing market is “more of an issue than many analysts realize.”

He said B.C.’s tax is “a very reasonable step.”

“I think what’s gone on in B.C. cries out for some sort of intervention,” he said, estimating the tax would bring in “hundreds of millions” in new revenue.

B.C. realtors were less enthusiastic about the tax, which takes effect next week and came with little warning. The Real Estate Board of Greater Vancouver said the announcement “needlessly injects uncertainty into the market” and called on the province to exempt transactions that have not yet closed. The tax will apply when purchases by foreign buyers are registered with the provincial land title office, meaning it could affect deals that were done weeks ago but have not yet been registered.

Vancouver Re/Max realtor Keith Roy said the tax will do little to curb foreign demand for Vancouver housing, but would likely be a blow to consumer confidence as the market was already showing signs of a slowdown – with some houses selling for below the asking price and with conditional offers.

“The public will believe, and rightfully so, that the government is making legislative and policy changes that impact the price of home ownership,” he said. “As soon as they believe that, they’re going to expect to pay less or expect to buy more for the same amount of money.”

Toronto-Dominion Bank economists Michael Dolega and Diana Petramala predicted Vancouver-area housing sales would drop as much as 20 per cent and average resale prices would decline by 5 per cent over the next nine months.

The foreign-buyer tax, along with plans by Vancouver Mayor Gregor Robertson to tax vacant homes in the city, will likely compound what the TD economists said were already “significant signs of cooling” in Vancouver’s housing market.

Sales of existing houses have fallen 14 per cent in the region since April, and average prices have declined by 2 per cent, although both remain higher than similar levels last year. Metro Vancouver also had record levels of new home construction in the first half of the year.

“Even prior to the new policy announcement, we believed that foreign investors had already begun to gravitate to the more affordable Toronto market,” the TD economists wrote.

“House prices cannot and will not continue to rise at a 30 per cent annual rate,” she wrote in an e-mail commentary. “But, be aware of potential unintended consequences of government actions to deflate a bubble. A soft landing is what everyone hopes for, but soft landings are hard to engineer.”