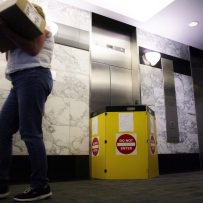 A scathing report from Ontario’s Auditor General raises serious concerns about the state of elevator safety in the province, but members of the industry say the public isn’t at risk.

In her report, released Wednesday, Auditor General Bonnie Lysyk slams the agency that regulates elevators, the Technical Standards and Safety Authority (TSSA) for poor oversight. She writes that in 2018, just over 80 per cent of elevators failed their TSSA inspection.

“Most Ontario elevators and escalators are not fully in compliance with safety laws, and the situation is getting worse,” the report found.

The report noted there have been 487 reported safety incidents involving elevators the TSSA determined had been caused by elevators not operating in compliance with applicable safety laws in the last five years.

The report noted the TSSA does not have “consistent inspection standards,” and a small number of companies dominate the market and have been failing to make sure elevators meet safety laws.

The issue is particularly relevant in Toronto, where so many people live in tall towers.

“So many people take the elevator as part of their basic commute,” said Councillor Josh Matlow, who added he often hears complaints from tenants in his downtown Toronto ward about elevators.

“Just like any other mode of transportation they would expect that the government is ensuring that they are safe and monitored and well maintained. And clearly this is not the case.”

“I expect that the government to take immediate action to make sure that every elevator in Ontario is safe, and is inspected and can provide assurance to every resident in every building that when they or their children get on that elevator, that they’re going to be safe,” he said.

At Queen’s Park Thursday Minister of Government and Consumer Services Bill Walker called the auditor’s findings on the TSSA “disturbing and unacceptable,” and said he has requested the TSSA board to come back with a report and recommendations by January 31, 2019.

“We recognize there are serious concerns with elevators. We are currently examining options on improving elevator safety and availability and overall oversight of TSSA,” he said in a followup statement to the Star.

Sean McCormick, business manager for the International Union of Elevator Constructors Local 50 Toronto, said he doesn’t think the province’s elevators are unsafe. But said there is “definitely … lack of maintenance being done,” especially with a recent shift from monthly to quarterly maintenance.

Bonnie Rose, president and CEO of the TSSA safety authority, said Wednesday her agency takes “our accountability for administering Ontario’s public safety mandate extremely seriously” and has already established a plan to address the auditor’s concerns around elevators and other matters to “strengthen our ability to keep Ontarians safe.”

On its website the agency has posted a “five-point plan,” which includes using enhanced data to identify risks and being transparent in reporting findings to the public.

Rob Isabelle, CEO of elevator consulting firm KJA Consultants Inc., said the report paints a picture of “disaster” and a system “heading toward the abyss,” which is not accurate.

“From a safety point of view, it’s not a crisis,” he said. He added there are “tons” of safety fallback measures to prevent disaster scenarios in elevators; for example, they are mandated to have at least four cables in case one snaps.

“If you have a not-so-good service-provider, you could actually have the elevator shut down for two weeks,” he said.

“If you’re wheelchair-bound, you’re on the fourth floor, the elevator is down, you cannot get in and out of your apartment.”

Doug Guderian, president of elevator contractor Elevator One, said the numbers in the report show a “concerning trend,” but said the state of Ontario’s industry still compares favourably to other jurisdictions.

“I’d rather ride an elevator 20 times in Ontario than once in Quebec,” he said.

—with files from Kris Rushowy and Robert Benzie