One-quarter of Vancouver homes could be torn down by 2030 because of rising land costs, study warns 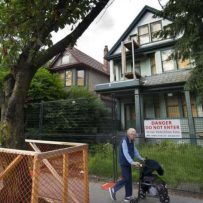 About a quarter of single-family, detached homes in Vancouver are at risk of being torn down between now and 2030 due to rising land costs, predicts University of B.C. architecture professor Joseph Dahmen.

He developed the “teardown index,” which compares the value of a residence to the value of the overall property, also known as its relative building value (RBV). The lower this RBV, the more likely a house will be torn down and replaced by a new one.

The RBV — based on municipal data and B.C. Assessment records on detached homes bought and sold between 2005 and 2015 — has been the single, most important predictor of whether a house will be kept or torn down, said Dahmen.

The scenario has persisted as land costs keep increasing, leaving what seem to be expensive and just-built homes quickly in jeopardy of being demolished again and again in order to keep pace, he said.

“I have been intrigued, cycling by many different (teardown) sites. The city is actively remaking itself,” said Dahmen, who grew up in Norway and studied in Boston before moving to Vancouver five years ago.

With the recent rise in real estate values, half of single-family homes in Vancouver have RBVs under 7.5 per cent, according to mathematician Jens von Bergmann of MountainMath Software, who collaborated with Dahmen.

A relative building value or RBV of 60 to 70 per cent would be considered healthy for a new building. One below 10 per cent means the likelihood of a home getting razed and replaced goes up significantly, they add.

“If you have $2 million in dirt, unless you build a $4-million house, which is hard to do, you can’t get to a RBV of 50 per cent. Most new builds only get 38 per cent. That’s the median. So they get demolished again,” said Dahmen.

The two set out to first dig into the economics and extent of tearing down single-family homes in Vancouver. Eventually, they hope to examine the environmental and financial impact of constant construction and demolition.

Upgrading old housing stock that may be “poorly insulated and not airtight” improves energy consumption and makes homes more efficient, argues Dahmen. In the long run, this could lower carbon emissions. However, the buildings need to stand long enough for the cost of reconstruction to be recovered. Aside from waiting long enough to recoup expenses for materials, there is also a need to consider the energy poured into building a new home, he added.

An optimal way to add value to a residence, in order to raise its RBV, is to allow for more multi-family, low-rise homes in areas that are currently not zoned for this, said Dahmen.

The researchers acknowledged the city’s desire to expand areas where homes built before 1940 cannot be demolished, which would halt some of their forecast. “It’s not to take away from this. Architectural heritage is important, but we should do it with a clear eye, taking into account, competing agendas such as sustainability and affordability,” said Dahmen.