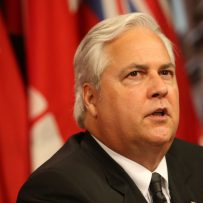 Releasing his latest Annual Report today, Ontario Ombudsman Paul Dubé reflected on the stunning and ongoing challenges faced by the province’s public sector due to the coronavirus pandemic.

“The profound shock to our public infrastructure and systems will provide countless lessons, as well as opportunities to strengthen them in future,” writes Mr. Dubé, whose office handled 26,423 complaints and inquiries about broader public sector services in fiscal 2019-2020. “We stand ready, as always, to help.”

Mr. Dubé notes that 2019-2020 was also “a year like no other” for the Ombudsman’s office, in that it began with the expansion of his mandate to two brand-new areas – children and youth in care, and French language services – and ended with the coronavirus crisis.

Working from home for the past 15 weeks, like most Ontario public servants, the Ombudsman’s team has continued to respond to thousands of complaints and inquiries, including more than 800 related to COVID-19. On June 1, Mr. Dubé launched a systemic investigation into the adequacy of the province’s oversight of long-term care homes during the pandemic.

“Our commitment, as always, is to assist Ontarians by engaging with those who provide public services to them,” he says in the report, adding that it “illustrates the many ways we honoured that commitment, before and during the pandemic” and “how we can help improve public services – so they can be relied on in good times and bad.”

Prior to the coronavirus outbreak, the Ombudsman’s office dealt with a record high number of complaints about Ontario correctional facilities (6,000), launched a systemic investigation into delays at the Landlord and Tenant Board (generating some 600 complaints), and issued investigative reports on a municipality and a school board that revealed “a disturbing lack of transparency that undermined public trust.” All of Mr. Dubé’s recommendations were accepted.

This Annual Report is also the Ombudsman’s first since his Office assumed the responsibilities of the French Language Services Commissioner and the investigative function of the former Provincial Advocate for Children and Youth on May 1, 2019.

The Ombudsman created two new units for this work, largely staffed by employees of those formerly separate offices. “The combined expertise of what were three separate offices has resulted in a more dynamic Ombudsman’s Office,” writes Mr. Dubé.

The new Children and Youth Unit handled more than 1,775 cases between May 1, 2019 and March 31, 2020, including 1,458 about children’s aid societies. The report details several cases where Ombudsman staff helped young people with concerns about their rights, their placements and their treatment in care. In addition, Ombudsman staff raised concerns with the Ministry of Children, Community and Social Services about gaps in policies and procedures in youth justice centres.

The Ombudsman is an independent, impartial officer of the Ontario Legislature who resolves and investigates public complaints about provincial government bodies, as well as French language services, child protection services, municipalities, universities and school boards. He does not overturn decisions of elected officials or set public policy, but makes recommendations to ensure administrative fairness, transparency and accountability. The Ombudsman’s recommendations have been overwhelmingly accepted by government, resulting in numerous reforms, including help for people with developmental disabilities who are in crisis, improved drug funding and newborn screening, and enhanced tracking of inmates in solitary confinement.