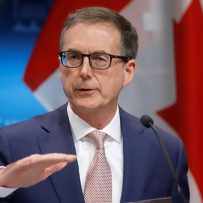 Slowing U.S. inflation is prompting traders to pare bets for a 75-basis-point increase in interest rates from the Bank of Canada next month.
Overnight swap markets suggest about a 45 per cent chance that officials led by Governor Tiff Macklem will increase borrowing costs by three quarters of a percentage point at their Sept. 7 decision. A move of that magnitude would bring the policy rate to 3.25 per cent, the highest since April 2008.

Bets were trimmed from around 60 per cent earlier Wednesday, before U.S. consumer price data showed yearly inflation slowing to 8.5 per cent, a lower reading than economists anticipated.

The downside surprise prompted traders to dial back wagers on not only the Federal Reserve’s hiking path, but also the Bank of Canada’s, on the possibility policy makers may not need to tighten financial conditions as quickly or as much as previously expected to rein in persistent price pressures.

July inflation figures for Canada, due Tuesday, will be a major determinant of bets going into the Bank of Canada’s next decision. Annual price gains hit 8.1 per cent in June, the highest since the start of 1983.

Should inflation decelerate or be seen to be peaking, Macklem and his officials could opt for a smaller hike after surprising markets in July with a 100-basis-point move they described as “front-loading.” But many analysts think bringing rates to more restrictive levels is the wiser move.

“The right thing for the Bank of Canada to do would be to hike 75,” Andrew Kelvin, senior Canada strategist with Toronto-Dominion Bank, said by email. “Just going to the top of the neutral range is quite a timid response to the current inflation backdrop, but the data seems like it’s going to give them the option of slowing to 50.”