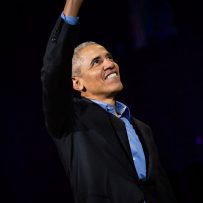 What brand of sado-masochism would lead Albertans to give ‘a rock star welcome’ to the man significantly responsible for the desperate state of the Canadian oil industry?

One can understand how former President Obama would be greeted enthusiastically in Vancouver, but what brand of amnesiac sado-masochism would lead Albertans to give him “a rock star’s welcome,” as Global News reported it? Perhaps the analogy would be appropriate if the rock star were, say, Neil Young, who was recruited by the U.S.-funded Tar Sands Campaign to suggest that Fort McMurray was (before the Great Fire) “like Hiroshima.” But would Neil Young get a rock star’s welcome in Calgary? There would surely be a few placards outside the venue.

The most salient reason for doubting the mental grasp of those in Calgary cheering the former U.S. president, who was in town Tuesday for a live “conversation” at the Saddledome, is that he is significantly responsible for the desperate state of the Canadian oil industry, specifically through his nixing of the Keystone XL pipeline in 2015. That rancid decision, which was without any coherent rationale but was made only to burnish Obama’s “legacy,” has cost tens of thousands of jobs and tens of billions of dollars to the Albertan and Canadian economies.

It is worth noting that Prime Minister Justin Trudeau shares similar legacy aspirations, as does his recently resigned policy minder, Gerald Butts. Butts put on a master class in smarmy evasion before the justice committee on Wednesday. He repeated ad nauseam the alleged threat to 9,000 jobs that was the sole reason for the government’s deep concern that former attorney general Jody Wilson-Raybould make the right decision on SNC-Lavalin. One could only wish the PMO cabal had been equally concerned about the much greater number of jobs already lost in Alberta.

According to a barf-worthy news report in the Calgary Herald: “With divisive politics and changing economies stoking fear and anxiety on both sides of the border, former U.S. president Barack Obama brought messages of hope and optimism to Calgary on Tuesday, paving the way to a kinder, gentler and cleaner planet.”

An equally star-struck Herald columnist took the opportunity to dump ritually on the current incumbent of the White House, highlighting the contrast between “grace and vulgarity, integrity and corruption, kindness and cruelty.” But while President Donald Trump may have reality-TV-sized personal shortcomings, any suggestion that his narcissism approaches that of Obama is more than a stretch. After all, as a presidential candidate in 2008, Obama declared that his accession to power would be the point at which the earth would begin to heal and the seas cease to rise. Canute without the irony.

Apparently nobody threw anything or stormed the Saddledome dais when Obama patronized the locals by saying that they ought to be proud of their oil and gas because it had “powered the world … and is still the cheapest means for us to power everything that we do.”

This is the guy who declared oil a dirty and dwindling 19th century resource shortly before presiding over a spectacular U.S. petroleum boom due to advances in fracking technology, for which he subsequently tried to take credit.

Although Obama admitted that you couldn’t link any particular weather event to climate change, he inevitably got into floods and droughts and hurricanes, and projected that “with the current pace we are on, the scale of tragedy that will consume humanity is something we have not seen in perhaps recorded history.” The bubonic plague, world wars, communist and fascist genocides? Mere blips. He suggested moose might become extinct.

“I am an old-fashioned guy,” he said boldly in Vancouver. “I believe in the facts, and the facts are that the planet is getting warmer.”

But nobody denies that fact. The pertinent question is: how much of that (mild) warming is attributable to man? Obama’s idea of science was established years ago when he tweeted the bogus — indeed ridiculous — claim that 97 per cent of scientists believe that climate change is “real, man-made and dangerous.”

Obama was declared to be above grubby partisan politics in Calgary, but appearing at a similar event in Vancouver later that day, he claimed that mainstream Republicans had “lost control” of the party when Sarah Palin was appointed as John McCain’s running mate in 2008. No mention of mainstream Democrats having more recently lost control of their party with the arrival of Alexandria Ocasio-Cortez and her flat-out barmy Green New Deal. But then how could Obama oppose the idea that such extreme measures were needed to save the world from neoliberalism? Sorry, I mean from climate catastrophe.

Obama ridiculed Justin Trudeau for being concerned about softwood lumber. “I was, like, ‘Dude. I’ve got Syria, the Paris Accords. Is that how we want to spend our time? On a timber agreement?’

He had used the same line in Winnipeg, but — to his infinite credit — interviewer Michael Burns noted “You just insulted us and we all laughed.”

And still Obama gave his sparkling shoes one final wipe on the Maple Leaf flag suggesting that Canada was merely paying “lip service” to its commitments to the Paris climate accord (from which his own country is now opting out entirely). He didn’t note — or probably didn’t know — that this mere lip service has thrown interprovincial relations into turmoil. And this from the guy who made a desperate “agreement” with China under which the U.S. would commit to hard reductions, while China would commit to nothing.

And still nobody booed.