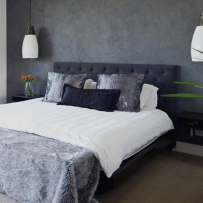 Toronto, with its myriad condominiums, is short on a very particular kind of layout that could yield incredible returns for investors—that is, if they’re lucky enough to find one of these units.

Units with two master bedrooms could reap premium rents for investors because no longer will the tenant with the larger bedroom carry the larger share of the monthly rent.

“These units have tremendous potential because, very often, if you’re an investor and your unit has a typical layout, one of the tenants has to get the master bedroom and probably pay more, but here you have two master bedrooms, so the two people sharing the apartment are treated equally with two master suites,” said Baker Real Estate President and CEO Barbara Lawlor. “You’ll get more money because of it, so these units are terrific investments.”

M2M, a master-planned community in North York features two master bedroom units, and while it’s largely targeting ethnic communities that prize multigenerational living, Lawlor noted that investors, too, could get in on the action. The units with two master bedrooms also have flex space and dens, meaning that a third tenant could live in the unit, albeit at a cheaper monthly rate than the occupants of the larger bedrooms.

In the T1 building of M2M, both master suites are adorned with 88 square foot balconies.

“The rent on something like this in today’s market would probably be $2,600 a month,” said Lawlor. “If you have two families, or two students, contributing, you get $1,300 from each. You can’t even get a one-bedroom in Toronto for $1,300, even in older rental buildings.”

“There’s demand in the market for multigenerational units,” said Fan Yang, Aoyuan’s deputy general manager. “Family living is moving into urban condos because nowadays more parents work there and don’t want to lose time on activities like cutting the grass and shoveling the snow. However, most condos available in the market are two-bedrooms, but the families I’m talking about are used to living in larger spaces with at least three bedrooms, so we see a need there. We also see that they want to bring their grandparents to come and live with them.”

Whether investors decide to target the multigenerational family or the young professional, Yang says the two master bedroom novelty is one they will be able to cash in on.

“They will have their own privacy, even though they share the unit together, because master bedrooms come with their own bathrooms, and that’s one of the reasons why the rent will be much higher than on even two one-bedroom units.”