‘No good way out of this’: Why controversial legislation might not solve Trudeau’s pipeline problem 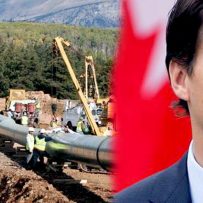 Justin Trudeau has a plan to get new Canadian pipelines built, but legal experts warn the prime minister could fail to get shovels back in the ground under his proposed changes.

The federal plan to revamp how major natural resource proposals are reviewed – a series of legislative changes contained in Bill C-69 – will make future pipeline approvals “much less likely to be slapped down with a court case,” Trudeau said during an early September visit to Edmonton. His comments came less than a week after Federal Court of Appeal Justice Eleanor Dawson ruled that failure to meaningfully consult with First Nations was a key reason for invalidating the government’s approval of the Trans Mountain pipeline expansion.

And Dwight Newman argues C-69 will not improve upon the status quo.

“It is difficult to see how this legislation [C-69] is actually affecting a real improvement in the consultation issues,” the University of Saskatchewan law professor and Canada Research Chair in Indigenous Rights in Constitutional Law told BNN Bloomberg in a telephone interview. “There could be some chance for government to try to define consultation better than the courts have, in more specific ways, but… I don’t see C-69 as trying to do that right now.”

C-69, in its current form, makes only vague reference to consulting more with Indigenous communities “that may be affected by the carrying out of the designated project,” promising to incorporate traditional knowledge in future reviews and ensuring at least one member of those review panels is of Indigenous descent.

“Under our better rules, Indigenous traditional knowledge will be protected and it will be mandatory to consider it along other sources of science and evidence to inform decision-making,” Caroline Thériault, spokesperson for federal environment and climate change minister Catherine McKenna, told BNN Bloomberg via email. “We will also work in partnership with Indigenous peoples from the start through early and inclusive engagement so we can get to better project decisions.”

How early consultations begin or how much consultation is done is hardly the point as far as Gordon Christie is concerned.

“There seems to be this perception in the government that if you do more consultation, that is all that is required, just more,” the University of British Columbia law professor specializing in Indigenous law told BNN Bloomberg via telephone. “But the courts have said for 15 years that you need to have meaningful dialogue [and] there is nothing in this legislation that seems to do that.”

Meaningful consultation “entails testing and being prepared to amend policy proposals in light of the information received, and providing feedback,” Dawson wrote, citing a recent Supreme Court of Canada decision involving the Haida Nation. “Where deep consultation is required, a dialogue must ensue that leads to a demonstrably serious consideration of accommodation.”

“[C-69] is more just about showing up earlier and showing up more often [but] what is missing is any actual interest on the part of the government to change how it does things,” Christie said, “It just seems to be interested in seeming to do the right thing without actually doing the right thing.”

Natural Resources Minister Amarjeet Sohi unveiled Friday the “first steps” of Ottawa’s plan to push the Trans Mountain expansion project forward. To start, the government will be instructing the National Energy Board to reconsider its recommendation to approve the near-tripling of the pipeline to take into account marine shipping.

Critics have long argued the projected increase in oil tanker traffic along the British Columbian coast from roughly five tankers per month to 34 as a result of the expansion should have been included in the initial NEB review. While Sohi did not address the government’s plan to improve the consultation process with local Indigenous communities, the minister said those details would be coming “soon”.

Ottawa is expected to unveil its plan to push Trans Mountain forward by the end of this month. The hope is reportedly to task a retired federal judge with leading a new round of consultations with the goal of finding a solution that will allow construction to resume ahead of next year’s federal election to avoid Trans Mountain becoming an issue at the ballot box.

Yet Newman warns there could soon be no amount of consultations that courts will consider enough.

Early this year, the Supreme Court of Canada heard arguments from the Mikisew Cree First Nation of northern Alberta in favour of giving Indigenous communities a more direct role in drafting legislation that affects them. If the country’s top court sides with the Mikisew Cree – and Newman notes a decision could come in a matter of weeks – the impact would be no less than a “fundamental transformation” of how Canadian law is made, Newman said.

First Nations “want more ability to make decisions with the government,” explained UBC’s Christie, “but co-decision making is not even on the table here [in C-69].”

If C-69 passes the Senate where it is currently being debated and becomes law, Christie warns the first major project to be reviewed under its process will face legal challenges “and the First Nations will say there has been a lot more talk, but still no substance.”

“I don’t know what is going on in Trudeau’s little circle, he is stuck between a rock and a hard place and he likes to smile and say everything is okay,” Christie said, “but [Trudeau] must understand there is no good way out of this.”