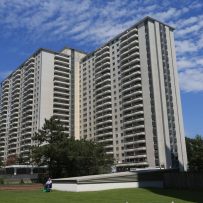 Landlords in Toronto will have to pay a fee to the city if they fail to provide for tenants in the event the buildings they live in are evacuated due to fire, flood or other service disruptions — part of a suite of changes adopted by city council Wednesday strengthening tenant rights.

Landlords will also have to post a colour-coded sign in a prominent location, displaying a rating from the city, similar to what restaurants currently have to do under DineSafe.

The move comes as the city continues to pay for housing and social services for tenants of 650 Parliament St., about 1,000 of whom remain out of their homes after a fire in the building in August, 2018, according to Councillor Kristyn Wong-Tam. The cost to the city for that relocation has mounted into the millions of dollars, according to city staff.

“We want a tool to step in when the landlord hasn’t taken the necessary steps to house their tenants,” Carleton Grant, the city’s executive director of municipal licensing and standards, told councillors during the meeting.

Kemba Robinson, a spokesperson for the anti-poverty group ACORN, said the organization is satisfied with the outcome.

“We at ACORN have been fighting for over 10 years to get these rules implemented and we’re extremely happy with the vote that has been passed today,” she said.

“We believe that the landlord should be responsible for rehousing (tenants) until the place they’re living in has been fixed.”

In addition to the fees and publicly posting ratings, the new RentSafe measures include new standard timelines for fixing specific property standards violations and limits to time extensions for landlords to complete necessary repairs. The rules apply to properties with three or more storeys and 10 units or more, but all apartments, including single basement apartments, are covered by property standards, according to city spokesperson Brad Ross.

The measures add muscle to the RentSafe initiative approved by council in 2017 and regarded as one of the most comprehensive, progressive and rigorous municipal tenant protection initiatives in North America.

However, enforcement has been lacking, according to Coun. Josh Matlow (Ward 12 Toronto—St. Paul’s), who helped draft RentSafe, together with ACORN and other stakeholders.

“There have been significant failings in the implementation and we addressed those today,” said Matlow.

“This RentSafe, if implemented the way that we have requested staff to do, will see buildings across Toronto become healthier and safer places for renters to live.”

The amendments to RentSafe were adopted unanimously by council, after a motion by Coun. James Pasternak (Ward 6 York Centre), to refer the matter back to committee for more study was unsuccessful. Wong-Tam (Ward 13 Toronto Centre) pointed out that the issues have been under discussion for a dozen years, and have been the subject of several public consultations.

In a letter to Bailao, Chong wrote that landlords shouldn’t be charged a fee for relocating tenants if the tenants caused the building to be uninhabitable and the idea requires more study.

Chong has also said that forcing apartment buildings to post a rating from the city could end up stigmatizing residents. He couldn’t be reached for comment Wednesday afternoon.

Coun. Paul Ainslie (Ward 24 Scarborough-Guildwood) told council he supported the amendments because he too often hears from landlords that: “Work is in progress; it’s going to get done.”

He said he supports RentSafe because “the onus is on the landlord and that’s where it should be.”

Mayor John Tory said the amendments wouldn’t be needed if all landlords behaved responsibly, but unfortunately not all of them do.

“You have to regulate to deal with the people who don’t behave properly,” Tory said.

While there are many good landlords in the city, “there are some landlords who couldn’t care less,” said Coun. Frances Nunziata, (Ward 5 York South—Weston).

Also Wednesday, council moved to explore rent controls for all units in buildings where developers had received significant public benefits through the mayor’s key housing program.

After Matlow pushed to reopen an earlier vote to impose rent controls on 11 new Housing Now sites — a program which sees the city offer land and other financial incentives to developers to secure new affordable housing — Nunziata, the Speaker, moved for staff to report back in January on the feasibility of the city imposing such rent controls.

While they wait for that report, council voted to pause the request for proposals processes on the remaining Housing Now sites previously approved for development.

They also asked the province of Ontario to reinstate rules that limit rental increases on all new rental units.

Story by: Francine Kopun (with files from Jennifer Pagliaro)
Francine Kopun is a Toronto-based reporter covering city hall and municipal politics. Follow her on Twitter: @KopunF