New laws and rules coming into effect in 2018 across Canada 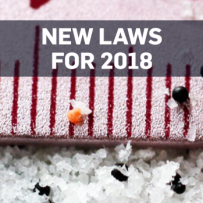 A number of laws and regulations are coming into effect on Jan. 1 or later in 2018 across Canada, including marijuana legalization nationwide and higher minimum wages in Ontario and Alberta. Here are the highlights you need to know:

The federal Liberals have set July, 2018 as the deadline to legalize recreational marijuana. Sales of pot will be restricted to people 18 and older, although provinces will be able to set their own minimum age requirements. Provinces are also tasked with figuring out how to sell and regulate marijuana.

In Ontario, for example, pot will be sold in stores run by a subsidiary of the Liquor Control Board of Ontario.Manitoba, meanwhile, wants to sell cannabis through private-sector retail outlets and online stores. A full breakdown of provincial marijuana plans is available here.

Under the new federal legislation, people of legal age will be allowed to publicly possess up to 30 grams of dried cannabis, or its equivalent in non-dried form.

New mothers and fathers planning to begin their parental leave on or after Dec. 3 will be able to spread 12 months’ worth of federal employment insurance over 18 monthsand stay home with their child longer.

The federal government wants all provinces and territories to impose a $10 per tonne carbon tax by 2018. If a province or territory doesn’t implement a carbon price on its own, Prime Minister Justin Trudeau said Ottawa will implement a price in that jurisdiction. Ottawa has been clashing with some provinces on this issue.

Depending on where you live, a carbon price plan could result in higher gasoline prices and heating bills. You may also see your grocery bill rise, since food is often transported by diesel-burning vehicles.

If you are a small business owner, and especially if you run a family business, you have likely already heard about the federal government’s controversial tax reform plan.

As of Jan. 1, Ottawa is tightening rules that allow small-business owners to lower their tax burden by sharing some of their earnings with family members — known as income sprinkling.

The Department of Finance has outlined the changes on its website, saying the revised income-sprinkling rules contain clear, simple tests to determine whether a relative has made a meaningful contribution to the business. The tests include checking to see whether a family member has made a substantial capital investment in the business or meets requirementson minimum age and number of hours worked.

As of Jan. 1, Health Canada will ban the manufacturing and importing of toiletries that contain plastic microbeads.The microbeads have been used in toothpaste, facial scrubs, body lotions and shower gels, among other everyday health and beauty items.

The ban will make exceptions for natural health products or non-prescription drugs that contain microbeads, but those will also be banned later in the year, starting July 1.

The tiny plastic beads are usually too small to be caught by wastewater treatment system filters and end up in lakes, rivers and oceans. They are now listed as a toxic substance under the Environmental Protection Act.

On Jan. 1, the Ontario minimum wage will increase to $14 per hour, from $11.60 per hour. Changes to provincial employment laws also include giving three weeks of paid vacation to all employees once they’ve been with a company for five years, expanding personal emergency leave to employees of small companies, and giving up to 104 weeks of unpaid leave to parents whose children die.

Buying tickets to see your favourite band play in Ontario may be easier – and cheaper – in 2018, thanks to new Ticket Sales Act provisions that passed in mid-December.

Changes to ticket-selling laws include banning scalper bots, which buy a large number of tickets online for an event then resell them at much higher prices.

The new legislation prohibits tickets from being resold at more than 50 per cent above the face value and makes it illegal to knowingly resell tickets that were purchased by bots.

For years, frustrated consumers have been complaining about the lack of affordable tickets for popular concerts and events after scalper bots snatch up hundreds of them at once, usually within minutes of release.

Starting in January, the Quebec government has promised to impose new rules for Uber drivers in the province.Uber drivers will have to undergo police background checks and 35 hours of training. Uber initially balked at those regulations and threatened to pull out of the province, but the ride-sharing company decided to stay after meetings with Quebec’s transport minister.

Autonomy for adults with intellectual disabilities

On Dec. 28, new legislation will come into effect in Nova Scotiarecognizing the independence of adults with intellectual deficits. The Adult Capacity and Decision Making Act will recognize a person’s right to live their own life and make their own decisions, except in instances where that’s not possible because of a court-proven impairment of capacity.

The new law replaces the province’s Incompetent Persons Act, which was the subject of a constitutional challenge.

Workplace law changes taking effect on Jan 1 include extended unpaid job protection for compassionate care leave, changes to how employees can bank their overtime hours and a new unpaid leave for employees dealing with a domestic violence situation.

In mid-November, Alberta passed Bill 24, which strengthens rules on gay-straight alliances in the province’s schools.

The legislation will prevent schools from denying or delaying the formation of gay-straight peer clubs. The law also now makes it clear that school officials can’t tell parents if their children are in a gay-straight alliance except in special circumstances, such as when a student is under direct threat of harm.

The governing New Democrats said they wanted to change the law in response to comments made by United Conservative Leader Jason Kenney, who has said it’s best in some cases to tell parents their kids have joined a gay-straight alliance. Alberta’s education minister accused Kenney of wanting to “out” gay students.

The Alberta government is introducing new rules meant to protect condominium buyers in the province.

If you’re a condo buyer, the new rules mean you’ll get more information at the time of purchase, such as construction budgets and deadlines. The changes are also supposed to put remedies in place if your condo occupancy date is delayed.

Some parts of the Condominium Property Amendment Act, affecting condo boards and corporations, will come into effect on Jan. 1, while other changes will apply to condo sales agreements on or after April 1.

The provincial government says it wants to better protect consumers when they deal with payday lenders. New laws governing the payday loan industry, which take effect in January, will include licensing requirements for loan businesses, as well as various disclosure requirements for lenders.

Starting in 2018, New Brunswickers will get another paid holiday. Family Day will be observed in the province on the third Monday of every February.

With files from The Canadian Press, CTV Atlantic and CTV Montreal