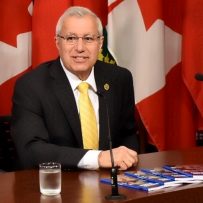 Ontario’s new finance minister wants to get the message out that the province is open for business.

In his first television interview since being appointed Ontario’s finance minister, Vic Fedeli told BNN Bloomberg on Wednesday that he expects his new government to create a better investment environment in the province.

“We’re fixing all of the other materials that were necessary to be fixed in Ontario to prepare the business community to be able to grow and expand.”

Fedeli – who was named Ontario’s new Minister of Finance on Friday, among 21 postings doled out by new Premier Doug Ford – said one of his government’s first orders of business will be a ‘line-by-line’ examination of Ontario’s books.

The Finance Minister would not commit to a date for the province’s first budget under Ford. He did say that quarterly and mid-term reports in July and August, as well as the public accounts and a fall economic statement would give the market “a full and clear understanding of where we are today, where we see ourselves going in the future and the path to prosperity for Ontario.”

Auditor General Bonnie Lysyk warned in May that the provincial deficit could be as much as $5 billion more than the Wynne government had forecast.

“We’ll do an assessment,” Fedeli said. “The group will look at refining their practices and then coming out with how to find efficiencies.”

“It’s not just about getting in and seeing what happened. It’s about solutions.”

The Ford government has already made some decisions in its first week in office, including announcing on Tuesday that it was issuing the required one-year notice to withdraw from the carbon-allowance trading system Ontario participated with Quebec and California. Eliminating the cap-and-trade system was a major campaign promise.

Fedeli says the carbon allowance system was not in the province’s best interest.

“It was never truly used for any greenhouse gas reduction,” Fedeli said. “The auditor general told us that 80 per cent of the benefits accrued to either California or Quebec.”

“This was – to be a little bit crude – it was more a slush fund in terms of the dollars. Let’s just be clear about that: That very little accrued towards any improvement in our environment. We will have a methodical wind-down of the program, we’ll honour commitments and it will be a respectful wind-down of that program that will happen, starting now.”

Fedeli also outlined part of the Premier’s plan for combatting the Trump administration’s trade tactics and tariffs that could threaten Ontario’s vital auto industry, among other sectors.

“He will be meeting with many of the U.S. governors, especially the ones that are most active in trading, where they’re our largest trading partners,” Fedeli said. “He is going to be meeting face-to-face with many men and women of our team to be able to work with the governors. I think the premier will play a pivotal role in this.”

He was less firm on the province’s plan for revenue expectations from legalized cannabis, saying there is just no basis for comparison.

“It’s just not tested, don’t have a comparator out there,” he said. “We can’t use Colorado as a comparator, we can’t use the other provinces. Our staff is planning for the best possible rollout of online and bricks-and-mortar locations. We’re planning these to optimize in a safe and convenient way for people.”