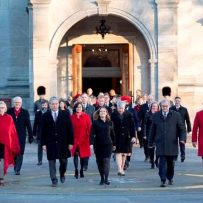 On November 20, Prime Minister Trudeau introduced his new cabinet. This sets out some background on the five Ministers who are of particular relevance for Canada’s rental housing providers.

Minister of Finance – Bill Morneau
Bill Morneau is returning as the Minister of Finance. He has been the Minister and the M.P. for Toronto Centre since 2015. Over the past term, Minister Morneau has overseen an increase in the income tax rate on the top bracket, changes in the taxation of small businesses, an expansion of the CPP and four deficit budgets. He and the government also considered, but rejected, an increase in the taxes on capital gains.

The key issue for rental housing will be the Liberals’ promised review of “government spending and tax expenditures to ensure that wealthy Canadians do not benefit from unfair tax breaks.” That effectively promises a consultation of possible revisions to the capital gains tax regime (and other tax measures). It could include a review of the capital gains exemption for principal residences, perhaps setting a limit on that exemption.

CFAA will work with Minister Morneau on capital gains taxes on rental housing, and other tax issues.

After immigrating to Canada in 1993 at age 17, Minister Hussen finished high school and worked with the Hamilton Social Services Department. He went on to become the president of the Regent Park Community Council, and helped to secure the revitalization project of Regent Park, advocating for its residents. He has also served as National President of the Canadian Somali Congress and on an income security task force as chaired by the Toronto City Summit Alliance.

CFAA works with CMHC and the Minister about housing policy and housing subsidy programs, including the Rental Construction Financing Initiative and the new Canada Housing Benefit. The Minister may also have some influence over any attempts to increase capital gains taxes on rental housing property.

NRCan is important to rental housing providers because of its work on building alterations and retrofits, seeking reduced energy use and GHG emissions. CFAA will work on those issues with Minister O’Regan.

As a young man, Minister Wilkinson was a Rhodes Scholar. During more than 20 years in the private sector, he has worked for many companies focused on green technologies, providing him with experience in energy and environmental technology. His previous experience includes CEO and other senior positions with QuestAir Technologies, BioteQ Environmental Technologies and Nexterra.

CFAA will work on climate change policies and their impact on rental housing buildings with Minister Wilkinson.