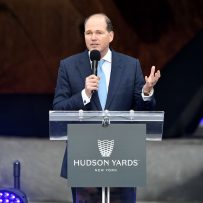 The new head of Ontario Municipal Employment Retirement System is feeling pretty confident about the pension fund’s ability to find pockets of value this year.

“The Canadian pension plans are the envy of the world in so many ways,” Blake Hutcheson said in an interview with BNN Bloomberg. “It’s been made okay to own platforms and buy and scale companies giving us tremendous competitive advantage. It’s been made okay to put teams together and pay them properly to compete with the best of the best,” he said.

Hutcheson takes over as CEO of the C$110 billion ($84 billion) fund in June, succeeding Michael Latimer when he retires. Omers plans to grow to C$200 billion of assets under management over the next seven to 10 years, he said.

It currently has 45% of its portfolio invested in the U.S., 30% in Canada, 20% in Europe and 5% in Asia. As it increases its assets under management, it will grow at a slightly slower pace in America and its biggest pivot will be India and pockets of Asia, he said.

U.S. assets make up a bulk of Omers’ portfolio of investments 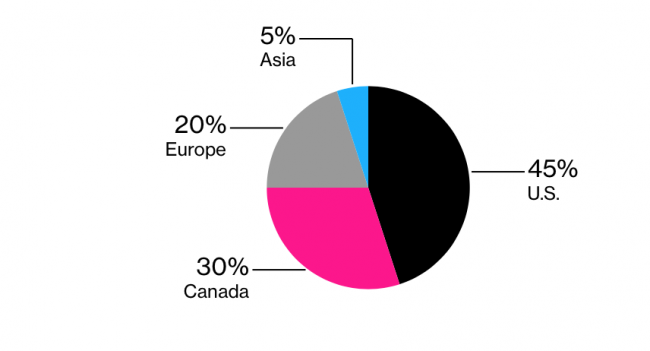 “We’re not naive to the noise out there when you’re competing with $1.5 trillion of additional capital for great ideas and we’re longer in the cycle than normal,” Hutcheson said in the interviewed that aired Thursday.

The fund has spent the last two to three years setting up for global success. “We’ve got offices in London, New York, Singapore, really effective operating companies and infrastructure, private equity, growth, equity, real estate and otherwise. So we’re well positioned to embark upon the next five to 10 year story.”

While Omers doesn’t focus on day-to-day tensions across the world and the impact on its investments, it has added people in the U.K., Singapore, Australia, the U.S. and Canada to its government relations team to factor in geopolitical risks around the globe.

“We have really thoughtful geopolitical people that put their lens over the decisions we take, that is a necessary and responsible component for somebody like an Omers,” he said. “The best defense against geopolitics and everything else is a formidable strategy that you stick to with the best assets that you can aggregate. And those have an ability to see through cycles and then the noise that whatever happens to you politically, you kind of factor into the mix.”

Sustainable investment strategies isn’t only right thing to do, but it’s also a success if the right assets are picked, he said. Omers analyzes any investment that goes through its committee through a filter of very specific questions and criteria that must meet a pretty rigid standard where it relates to ESG.

On the infrastructure front, the biggest opportunities for the pension giant are in renewable energy. “We’ve actually seeded some early enterprises to get behind that. We’re building windmills in the U.S., in Europe elsewhere. That’s a good example of being the beneficiary of forward thinking views of what’s happening with ESG.”