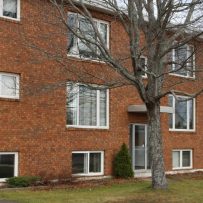 Proponents on all sides of affordable housing in New Brunswick are looking for solutions.

Premier Blaine Higgs has previously denied there is a “crisis” in the rental market. But low vacancy rates, rising rents, and concerns about evictions have been top of mind for many advocates, especially during the COVID-19 pandemic.

The province is now asking for public feedback on the rental situation from renters, landlords, developers and other stakeholders, who can share their stories in an online survey.

It closes on April 7.

Wanting independence but unable to find an apartment to rent, Mel Theriault says he lived in a motel for two months. But the Saint John-area man is now living with family while he continues his search to find an affordable place to live.

“I can tell that apartments are really in demand because prices are really high,” he tells Global News, “and also when I call around, they get scooped up really quick.”

A truck driver by trade, Theriault is currently on Employment Insurance (EI), making a challenging hunt even more difficult.

The New Brunswick Coalition for Tenants Rights has long been calling for a moratorium on evictions during the pandemic, as well as for rent control, capped at 2 per cent annually. That’s something Theriault also supports.

Aditya Rao, a member of the coalition, says low vacancy rates prove to be another challenge.

Survey data from the Canada Mortgage and Housing Corporation (CMHC) released earlier this year suggests the cost of a private apartment rental in New Brunswick went up by 5.5 per cent in 2020, compared to the national average of 3.6 per cent. Vacancy rates rose to 3.1 per in October of last year, compared to 2.6 per cent in 2019.

Meanwhile, the previously-announced 90-day review wraps up May 10.

But the Coalition says even those numbers are likely dated as the pandemic continues. Rao says the group was pleased to get an invite Wednesday morning to meet with the government to address their concerns.

Another thing everyone seems to agree on is that this consultation is needed to get the facts from a broader perspective.

But where the agreements come to an end is the issue, and the impact, of rent control.

Scholten says rent control would encourage developers to build more single-family homes, or perhaps condo buildings, “so rental buildings will take a hit with rent controls as they have elsewhere.”

The biggest change Scholten wants is the removal of double taxation.

“We stand alone in Canada — and not in a good way,” he says, referencing the only province with both a municipal and provincial tax.

Tuesday’s provincial budget included $10.8 million to “increase the availability of affordable housing units throughout the province.”

While it’s not clear how that money will be divided up, the government said in a news release it is a contribution in conjunction with the National Housing Strategy and the Canada Housing Benefit.