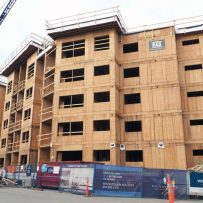 Despite construction of hundreds of rental housing units, Nanaimo’s rental vacancy rate still sits at one per cent.

City councillors, at a meeting Monday, were updated on Nanaimo’s affordable housing strategy. The strategy was adopted in 2018 to increase the supply of rental housing, support infilling of housing in existing neighbourhoods, diversify housing and support low-income and special-needs housing.

According to the update, presented by city social planner Karin Kronstal, housing starts in 2020 were 40 per cent rental housing, which is approaching Nanaimo’s goal of 50 per cent of new housing purpose-built for rental.

In 2020, 55 per cent of new housing starts were for apartments, exceeding the city’s 50 per cent goal for the year.

The city is also expected to meet supportive and below-market rentals within three to five years, but is falling shy of its goal of 20 per cent of new construction starts to be ground-oriented units, such as semi-detached and row houses, which according to the report, represented just 12.6 per cent new residential construction.

Nanaimo’s vacancy rate remained at just one per cent as of October 2020, and has been below the lowest end of what is considered healthy for a community, according to the Canadian Mortgage and Housing Corporation, since 2015, Kronstal said.

“We were a little surprised to see this because last year we had 410 rental housing completions, as reported through CMHC, so we thought it might go up a bit,” Kronstal said.

Kronstal said the low vacancy rate remains a concern and might be due to the pandemic, which might have caused property owners to not put units on the market.

“The number of homeowner – single-family dwellings – is usually not impacted, but the number of rental and condos have gone way down in 2020, so this may have further impact on our vacancy rate for next year,” she said.

Proposed amendments presented by Caleb Horn, city planner, include offering extra incentive to owners who dedicate entire projects to rental housing permanently, rather than, for example, half of the units in a project for 10 years before being offered for sale as condominiums.

“So the first item here is to change that from 50 per cent to 100 per cent because what we’ve found is that no one is stratifying or trying to stratify half of their building. It doesn’t happen. You’re either going all in or you’re not, so we might as well recognize that and go to 100 per cent, keep the 10-year incentive for that one, but in addition, create one for 100 per cent rental that would be for an indefinite amount of time, so they wouldn’t have the opportunity to go to condos after 10 years,” Horn said.

Coun. Don Bonner said he found the proposals conservative and asked if there were any ideas “way out of the box.”

“How do we step up our game really big? How do we make a big difference here?” Bonner asked.

Dale Lindsay, general manager of development services, said one way could be to zone properties permanently for construction of rental housing only, but he and Horn cautioned that the proposed amendments and incentives are meant to be taken up voluntarily by developers and property owners.

“The balance, as always, is at the end of the day the project has to be viable to build. That’s kind of the fine line that we walk in all of this and the approach is more as an incentive program,” Lindsay said.

Council voted unanimously to bring the affordable housing amendment proposals back before council for discussion at a future date.